Panipat is an old town in Haryana area of India. It is 90 kms north of Delhi and 130 kms south of Chandigarh.

Today, Panipat is famous as 'The Town of Weavers' because of its fine carpet-weaving and textile industries. 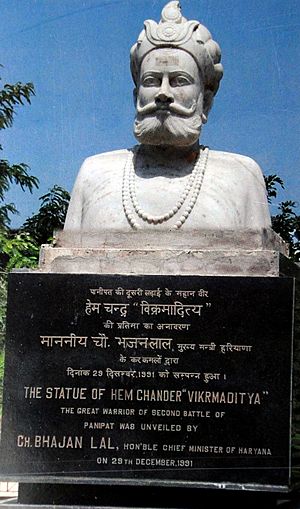 Statue of the Hindu Emperor of Delhi in 1556 Hem Chandra Vikramaditya, at Panipat, who lost his life in the Second Battle of Panipat

Panipat district was carved out from the erstwhile Karnal district on 1 November 1989. On 24 July 1991 it was again merged with Karnal district. On 1 January 1992, it again became a separate district. According to the legend, Panipat was one of the five cities (prasthas) founded by the Pandava brothers during the times of the Mahabharata; its historic name was Pandavaprastha (Sanskrit: पाण्डवप्रस्थ, lit. city of Pandavas) Panipat was the scene of three pivotal battles in Indian history. Panipat is first recorded in the Mahabharata as one of the five villages that the Pandavas demanded from Duryodhana. The five villages are the "panch pat":

The First Battle of Panipat was fought on 21 April 1526 between Ibrahim Lodhi, the Afghan Sultan of Delhi, and the Turko-Mongol warlord Babur, who later established Mughal rule in Northern Indian subcontinent. Babur's force defeated Ibrahim's much larger force of over one lakh (one hundred thousand) soldiers. This first battle of Panipat thus ended the 'Lodi Rule' established by Bahlul Lodhi in Delhi.

The Second Battle of Panipat was fought on 5 November 1556 between the forces of Akbar and Hem Chandra Vikramaditya, a Hindu King of Delhi. Hem Chandra, who had captured states like Agra and Delhi defeating Akbar's army and declared himself as independent king after a coronation on 7th Oct. 1556 at Purana Quila in Delhi, had a large army, and initially his forces were winning, but suddenly he was struck by an arrow in the eye and fell unconscious. On not seeing him in his howdah on the back of an elephant, his army fled. Dead Hemu was carried to Akbar's camp where Bairam Khan beheaded him His head was sent to Kabul to be hanged outside Delhi Darwaza, and his torso was hanged outside Purana Quila in Delhi.

The Third Battle of Panipat was fought on 14 January 1761 between the Maratha Empire and the Afghan and Baloch invaders. The Maratha Empire was led by Sadashivrao Bhau Peshwa and the Afghans were led by Ahmadshah Abdali. The Afghans had a total strength of 125,000 soldiers, and the Marathas had 50,000 soldiers and 100,000 pilgrims. The Maratha soldiers were unable to get food because of non-cooperation of other empires of Hindustan (India and Pakistan were not separated) and this resulted in having to eat the leaves off trees to survive. Both the sides fought their heart out. The Afghans were supported by Najib and Sujaudolla for the supply of food, and the Maratha had pilgrims along with them, who were unable to fight, including female pilgrims also. On the single day of 14 January, more than one lakh (100,000) of soldiers died resulting in the victory for the Afghans.

The wounded Hemu (a Hindu hero also known as Samrat Hem Chandra Vikramaditya) was captured by Shah Quli Khan in the Second Battle of Panipat and carried to the Mughal camp at Shodapur on Jind Road at Panipat. According to Badayuni, Bairam Khan asked Akbar to behead Hemu so that he could earn the title of Ghazi. Akbar replied, "He is already dead, if he had any strength for a duel, I would have killed him." After Akbar's refusal Hemu's body was denied honour by the Mughal battle tradition and was unceremoniously beheaded by Bairam Khan. Hemu's head was sent to Kabul where it was hung outside the Delhi Darwaza while his body was placed in a gibbet outside Purana Quila in Delhi to terrorise Indians.

It was one of Sher Shah Suri’s dying regrets that he could never fulfill his intention of erecting a tomb to the fallen monarch Ibrahim Lodhi. Much later, in 1866, the British relocated the tomb which was just a simple grave during construction of the Grand Trunk Road and added a platform to it with an inscription highlighting Ibrahim Lodhi’s death in the Battle of Panipat.

The garden of Kabuli Bagh along with the Kabuli Bagh Mosque and a tank were built by Babur after the First Battle of Panipat to commemorate his victory over Ibrahim Lodhi. Some years later when Humayun defeated Sher Shah Suri near Panipat, he added a masonry Platform to it and called it ‘Chabutra" Fateh Mubarak, bearing the inscription 934 Hijri (1557 CE). These buildings and the garden still exist under the name of Kabuli Bagh called so after Babur’s wife – Mussammat Kabuli begum.

According to the tradition, the site 8 km from Panipat and 42 km from Karnal, where Sadashiv Rao Bhau commanded his Maratha forces during the third battle of Panipat was marked by a black Mango Tree (Kala Amb) which has since disappeared. The dark colour of its foliage was probably the origin of the name. The site has a brick Pillar with an iron rod and the structure is surrounded by an iron fence. The site is being developed and beautified by a society with the Governor of Haryana as its president. Ror Maratha community of Haryana organises a programme every year in memory of Maratha warriors on the day of 14 January at Kala Amb in which many people from Haryana and Maharashtra participate.

The term Panipat Syndrome has entered the lexicon as the lack of decisive action, preparedness and strategic thinking by Indian leaders thus allowing an invading army to enter well inside their territory. It was coined by Air Commodore Jasjit Singh.

All content from Kiddle encyclopedia articles (including the article images and facts) can be freely used under Attribution-ShareAlike license, unless stated otherwise. Cite this article:
Panipat Facts for Kids. Kiddle Encyclopedia.