Kids Encyclopedia Facts
"Mountain blue" redirects here. For the pigment, see Azurite. For the other butterfly with this name, see Albulina pheretes.

Papilio ulysses, the Ulysses butterfly (also commonly known as the Blue emperor), is a large swallowtail butterfly of Australia, Indonesia, Papua New Guinea and the Solomon Islands. Its size varies depending on subspecies, but the wingspan is about 10.5 cm (4.1 in) in Queensland.

This butterfly is used as an emblem for tourism in Queensland, Australia. 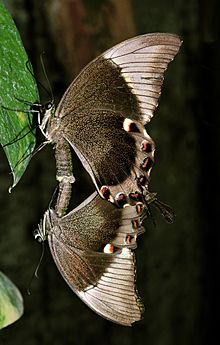 Copulating adults of Papilio palinurus daedalus, not Papilio ulysses. The larger one above is the female.

Ulysses is the Roman name for the Greek hero, Odysseus, a character in ancient Greek literature, the central character of Homer's Odyssey.

The Ulysses butterfly inhabits a portion of north-eastern Australia (eastern Queensland) and is also found in New Guinea, the Moluccas, Bismarck Archipelago and north-western Solomon Islands. New Caledonia is instead inhabited by the similar relative, Papilio montrouzieri. 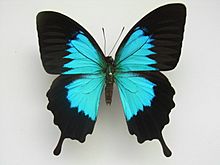 The Ulysses butterfly typically has a wingspan of about 14 cm (5.5 in), but depending on subspecies has some variations in size (western subspecies largest). The upperside of the wings are an iridescent electric blue; the underside is a more subdued black and brown. The colours are produced by the microscopic structure of the scales, a phenomenon called structural colouration.

The female of the species is different from the male in that she has little crescents of blue in the back, upside sections of her hindwings, where there is only black for males. When the butterfly is perched the intense blue of its wings is hidden by the plainer brown under side of its wings, helping it to blend in with its surroundings. When in flight, the butterfly can be seen hundreds of metres away as sudden bright blue flashes. Males are strongly attracted to the colour blue, including blue objects which are sometimes mistaken for females. 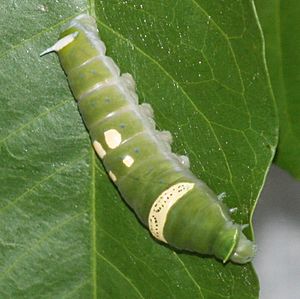 The Ulysses butterfly inhabits tropical rainforest areas and suburban gardens. The Australian government requires breeders to obtain permits, although the species is not endangered. In the past, this butterfly had been threatened but planting pink flowered doughwood has increased its numbers. Reduction in the number of the Euodia trees, a tree heavily used for laying eggs and for leaves eaten by caterpillars, may threaten the survival of this butterfly. Females favour small trees up to 2 metres tall to lay their eggs.

The larval food plants of this butterfly include kerosene wood, a variety of Citrus, and Euodia. In Australia, the Ulysses butterfly imago is known to feed from the blossoms of the pink flowered doughwood, a tree with clusters of small pink flowers that extrude from its branches.

All content from Kiddle encyclopedia articles (including the article images and facts) can be freely used under Attribution-ShareAlike license, unless stated otherwise. Cite this article:
Papilio ulysses Facts for Kids. Kiddle Encyclopedia.