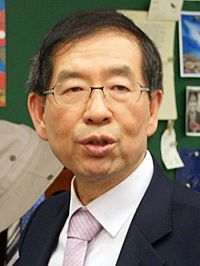 As a lawyer, he won several major cases. He also campaigned for the rights of comfort women.

On June 13, 2018, Park was elected to his third and last term as Mayor of Seoul. He was the first mayor in the city's history to be elected to a third term.

On July 9, 2020, Park's daughter reported him as missing to Seoul police authorities. He was found dead a few hours later, aged 64.

All content from Kiddle encyclopedia articles (including the article images and facts) can be freely used under Attribution-ShareAlike license, unless stated otherwise. Cite this article:
Park Won-soon Facts for Kids. Kiddle Encyclopedia.