Parsons is the county seat and largest city in Tucker County, West Virginia, United States. The population was 1,485 at the 2010 census. The mayor of Parsons is Dorothy Judy and the city administrator is Jason Myers. The city is also governed by a city council.

Parsons was created in Southern Tucker County. The town was named for Ward Parsons, described by one source as having once owned the land on which the town was built, and by another as having been an aged wilderness pioneer in the area.

The West Virginia Central and Pittsburg Railway was built into Parsons in 1888. The railway caused the town to boom by the 1890s. The railway was later merged into the Western Maryland Railway and provided passenger train service until the 1950s.

In the early 1890s, a dispute known as the Tucker County Seat War took place between the people in the town of Parsons and that of St. George over the location of the county seat. Although nobody was killed in the "war," the situation came to a climax when a mob of armed men from Parsons marched on St. George and took the county records by force.

The 1985 Cheat River flood caused extensive damage in Parsons. Over 90 percent of the businesses and hundreds of homes were damaged or destroyed. Twenty-five years later, in 2010, several empty storefronts lined the street up to the courthouse. Bars, restaurants, clothing stores and other businesses never returned to Parsons. The floods caused an estimated $570 million in damages. More than 3,500 homes and 180 businesses were destroyed. The BF Long & Co general store had a "high water mark" more than 7'6" from the floorboards. Flood stage in the shallow riverbed was only 7 feet.

Located at Parsons and listed on the National Register of Historic Places are the Tucker County Bank Building, Tucker County Courthouse and Jail, and Western Maryland Depot.

The climate in this area has mild differences between highs and lows, and there is adequate rainfall year round. According to the Köppen Climate Classification system, Parsons has a marine west coast climate, abbreviated "Cfb" on climate maps. 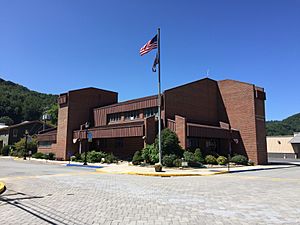 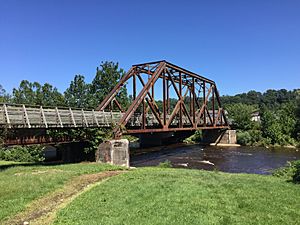 There were 628 households, of which 29.8% had children under the age of 18 living with them, 50.3% were married couples living together, 10.8% had a female householder with no husband present, 5.6% had a male householder with no wife present, and 33.3% were non-families. 29.3% of all households were made up of individuals, and 15.4% had someone living alone who was 65 years of age or older. The average household size was 2.36 and the average family size was 2.87.

All content from Kiddle encyclopedia articles (including the article images and facts) can be freely used under Attribution-ShareAlike license, unless stated otherwise. Cite this article:
Parsons, West Virginia Facts for Kids. Kiddle Encyclopedia.