Patten is a small town in Penobscot County, Maine, United States. At the 2020 census, the population was 881. The village of Patten is in the northeast part of the town. 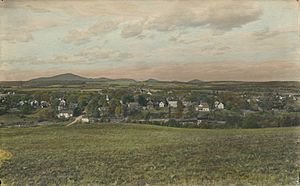 Patten ME from Finch Hill. Hand colored photograph taken about 1880. 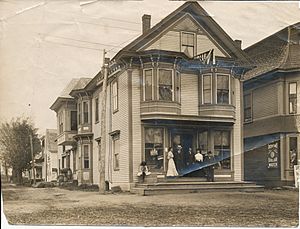 Patten Drug Store in Patten, Maine, at corner of Main and Katahdin Streets. Taken about 1880.

The town was named for Amos Patten, a resident of Bangor, Maine, who about 1828 purchased Township No. 4, Range 6, as it was then designated, for its vast timber supply. In 1829 Amos Patten hired Ira Fish and Eli Kellogg to survey the land. The surveyors soon asked permission to establish their homes in Patten. The town was incorporated on April 16, 1841 and given its present name at that time. By 1850 the population numbered 470, reaching 704 in 1870, and 716 residents in 1880. The town's infrastructure gradually appeared. In March, 1841 the Congregational Church was organized. Within a few years, citizens began agitating for local education. A bill to appoint Trustees of the Patten Academy passed the Maine legislature and was signed by the governor in 1847. The Patten Academy opened its doors with 61 students in September, 1848, and educated its residents for more than a century.

As noted below, Patten is situated in close proximity to several major rivers and streams. This abundant water power, however, did not favor the development of large-scale industry, although small mills and workshops utilized its power during most of the town's history.

Two factors explain Patten's comparatively early development, and its position as the major town of the Penobscot panhandle and southwestern Aroostook in the nineteenth century. First, it is the first town beyond the Mount Katahdin range, giving it access to the upper East Branch and lower Allagash River basins, which were leading lumbering areas. Second, it has the best agricultural land in the proximity of those basins. As a result, lumbering stimulated very early development of commerce and farming; and the town early gained the status as the distribution center and cultural nexus of all the towns west of Houlton and north of Lincoln. It is situated at the intersection of Maine Rte. 11 and Maine Rte. 159.

The six buildings of the Bradford Farm (1840) in Patten are listed on the National Register of Historic Places, and are now occupied by the Bradford House Bed & Breakfast Inn.

Patten lies on the western edge of the Mattawamkeag River system basin, almost at the edge of the East Branch of the Penobscot River's basin. Two major Mattawamkeag tributaries occupy its area: in the north, Fish Stream (formerly known as the "Mattawamkeag West Branch"), and in the south, small feeders of Molunkus Stream. Fish Stream is navigable by very small craft as far as Island Falls, around 10 miles (16 km) distance, for about six months of the year. In the early days of lumbering it was used to drive local cutting downstream, eventually to the mills at Old Town and Bangor. According to the United States Census Bureau, the town has a total area of 38.25 square miles (99.07 km2), of which, 38.19 square miles (98.91 km2) of it is land and 0.06 square miles (0.16 km2) is water.

This climatic region is typified by large seasonal temperature differences, with warm to hot (and often humid) summers and cold (sometimes severely cold) winters. According to the Köppen Climate Classification system, Patten has a humid continental climate, abbreviated "Dfb" on climate maps.

There were 447 households, of which 25.3% had children under the age of 18 living with them, 50.8% were married couples living together, 7.4% had a female householder with no husband present, 5.1% had a male householder with no wife present, and 36.7% were non-families. 32.4% of all households were made up of individuals, and 16.5% had someone living alone who was 65 years of age or older. The average household size was 2.20 and the average family size was 2.73.

All content from Kiddle encyclopedia articles (including the article images and facts) can be freely used under Attribution-ShareAlike license, unless stated otherwise. Cite this article:
Patten, Maine Facts for Kids. Kiddle Encyclopedia.