Kids Encyclopedia Facts
This page is about the U.S. Barracks building in Baton Rouge, Louisiana. For the headquarters of the United States Department of Defense, see The Pentagon.

The Pentagon Barracks, also known as the Old United States Barracks, is a complex of buildings located at the corner of State Capitol Drive and River Road in Baton Rouge, Louisiana, in the grounds of the state capitol. The site was used by the Spanish, French, British, Confederate States Army, and United States Army and was part of the short-lived Republic of West Florida. During its use as a military post the site has been visited by such notable figures as Zachary Taylor, Lafayette, Robert E. Lee, George Custer, Jefferson Davis, and Abraham Lincoln.

Pierre Le Moyne d'Iberville visited the area circa 1700. France retained the Baton Rouge site until the British took control in 1763.

In 1779, during the American Revolutionary War, the British erected a dirt Fort New Richmond on the banks of the Mississippi River. Bernardo de Gálvez, colonial governor of Louisiana (New Spain), arrived on 20 September 1779 and found three hundred British troops garrisoning Fort New Richmond. In the Battle of Baton Rouge (1779), engineers under Spanish Governor Gálvez quickly constructed a siege line, enabling the Spanish troops to shell Fort Richmond; the British surrendered the next day. The Spanish garrisoned the fortification and renamed it Fort San Carlos.

American and remaining British settlers in Louisiana resisted Spanish control and rebelled in 1810 to establish the Republic of West Florida. They flew their Bonnie Blue Flag over Fort San Carlos throughout the republic's short three-month life. The Republic surrendered the city of Baton Rouge to United States authorities on December 10, 1810.

United States Army Captain James Gadsden designed the Baton Rouge Barracks and took charge of their construction from 1819 to 1825. The soldiers completed four two-story brick buildings, forming four sides of a regular pentagon, by 1825, hence the nickname "Pentagon Barracks." They also built a commissary-warehouse building, forming the fifth side of the pentagon, in 1821, but tore down this defective building within a few months due to faulty construction. The Pentagon Barracks could house one thousand troops.

The Army in 1825 established a large adjacent Baton Rouge Arsenal and Ordnance Depot to serve the then-Southwestern United States.

The Confederates attempted unsuccessfully to retake Baton Rouge in the Battle of Baton Rouge (1862). Union authorities renamed the Barracks and Arsenal as Fort Williams after Union General Thomas Williams, who was killed in the battle. Union soldiers built earthworks to protect the complex, incorporating an old Indian mound into the defenses. 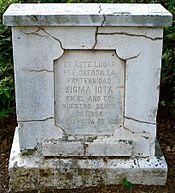 Monument of Sigma Iota's birthplace on the former LSU Campus

In 1884, the General Assembly of Louisiana passed a resolution allocating the full usage of the buildings and grounds of the Pentagon Barracks to Louisiana State University. The University gained full possession of the grounds in 1886 and the buildings were used as dormitories for the students. The grounds were used by LSU until the university moved to its current location in 1926.

In 1951, ownership of the Barracks was transferred to the State of Louisiana and on July 26, 1973, the buildings were placed on the National Register of Historic Places. The Pentagon Barracks still houses the offices of the lieutenant governor and private apartments for state legislators.

All content from Kiddle encyclopedia articles (including the article images and facts) can be freely used under Attribution-ShareAlike license, unless stated otherwise. Cite this article:
Pentagon Barracks Facts for Kids. Kiddle Encyclopedia.