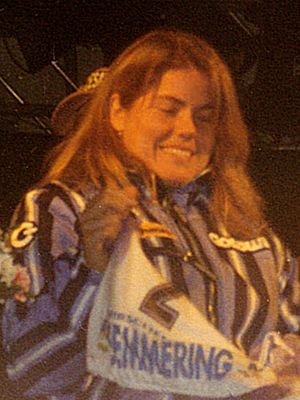 Pernilla Wiberg (born October 15 1970 in Norrköping) is one of the most successful Swedish alpine skiers. She won the giant slalom in the 1992 Winter Olympics in Albertville and the Alpine combination at the 1994 Winter Olympics in Lillehammer as well as 24 wins in the Alpine skiing World Cup between 1991 and 1999. She was elected a member of the International Olympic Committee in 2002. In club competitions, she represented Norrköpings SK.

All content from Kiddle encyclopedia articles (including the article images and facts) can be freely used under Attribution-ShareAlike license, unless stated otherwise. Cite this article:
Pernilla Wiberg Facts for Kids. Kiddle Encyclopedia.