Sergey Nazarovich Bubka (born 4 December 1963) is a Ukrainian former pole vaulter. He represented the Soviet Union until its dissolution in 1991. Bubka was twice named Athlete of the Year by Track & Field News, and in 2012 was one of 24 athletes inducted as inaugural members of the International Association of Athletics Federations Hall of Fame.

Bubka won six consecutive IAAF World Championships, an Olympic gold medal and broke the world record for men's pole vault 35 times. Sergey has also beaten his own record 14 times. He was the first pole vaulter to clear 6.0 metres and 6.10 metres.

He held the indoor world record of 6.15 meters, set on 21 February 1993 in Donetsk, Ukraine for almost 21 years until France's Renaud Lavillenie cleared 6.16 metres on 15 February 2014 at the same meet in the same arena.

He is the current outdoor world record holder at 6.14 meters, a record he has held since 31 July 1994, though since adopting rule 260.18a in 2000 the IAAF regards Lavillenie's record as the official "world record."

Born in Voroshilovgrad (now Luhansk), Bubka was a track-and-field athlete in the 100-meter dash and the long jump, but became a world-class champion only when he turned to the pole vault. In 1983, virtually unknown internationally, he won the world championship in Helsinki, Finland, and the following year set his first world record, clearing 5.85m (19 ft 2 in). Until the dissolution of the USSR in late 1991, Bubka competed for Soviet teams. The Soviet sports system rewarded athletes for setting new world records, and he became noted for establishing new records by slim amounts, sometimes as little as a centimeter higher. This allowed him to collect frequent bonus payments and made Bubka an attraction at track-and-field meets. By 1992, he was no longer bound to the Soviet system, and signed a contract with Nike that rewarded each world record performance with special bonuses of $40,000.

He has a son who is a professional tennis player, whose name is also Sergei.

Sergey Bubka started competing on the international athletics scene in 1981 when he participated in the European Junior Championship finishing seventh. But the 1983 World Championship held in Helsinki was his actual entry point to the world athletics, where a relatively unknown Bubka snatched the gold, clearing 5.70 metres (18 feet 8 inches). The years that followed witnessed the unparalleled dominance of Bubka, with him setting new records and standards in pole vaulting.

He became the first athlete ever to jump over 6.10 metres, in San Sebastián, Spain in 1991. Until January 2014, no other athlete on earth had cleared 6.07, indoors or outdoors. In 1994, he achieved his personal record with a vault of 6.14 meters, long after many commentators assumed the great sportsman was retired. Bubka increased the world record by 21 centimetres (8 inches) in the period from 1984 to 1988, more than other pole vaulters had achieved in the previous 12 years. He cleared 6.00 meters or better on 45 occasions. As of June 2015, 6 meters had been cleared by all athletes worldwide exactly 100 times.

Bubka officially retired from pole vault in 2001 during a ceremony at his Pole Vault Stars meeting in Donetsk.

Despite his dominance in pole vault, Bubka had a relatively poor record in the Olympic Games. The first Olympics after Bubka's introduction to the international athletics was held in 1984 and was boycotted by the USSR along with the majority of other Eastern Bloc countries. Two months before the Games he vaulted 12 cm higher than the eventual Olympic gold medal winner Pierre Quinon. In 1988 Bubka competed in the Seoul Olympics and won his only Olympic gold medal clearing 5.90 m. In 1992 he failed to clear in his first three attempts (5.70, 5.70, 5.75 m) and was out of the Barcelona Olympics. At the Atlanta Olympics in 1996 a heel injury caused him to withdraw from the competition without any attempts. In 2000 at the Sydney Olympics he was eliminated from the final after three unsuccessful attempts at 5.70 m.

Bubka won the pole vault event in six consecutive IAAF World Championships in Athletics in the period from 1983 to 1997: 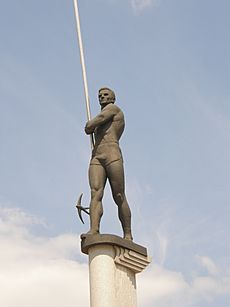 Bubka possessed great strength, speed and gymnastic abilities. He gripped the pole higher than most vaulters to get extra leverage, though Bubka himself played down the effect of grip alone.

His development and mastery of the Petrov/Bubka technical model is also considered a key to his success. (A technical model is a sequence of positions and pressures which describe the method and style form of pole vaulting.) The Petrov/Bubka model is considered superior to many others today, because it allows the vaulter to continuously put energy into the pole while rising towards the bar. Most conventional models focus on creating maximum bend in the pole before leaving the ground, by planting the pole heavily on the landing pad. The Petrov/Bubka model follows the technique used by Kjell Isaksson, which concentrates on driving the pole up, rather than bending it while planting it on the landing pad, combined with high running speed. While the traditional models depended on the recoil by bending the pole, the Petrov/Bubka model may exploit the recoil of the pole and exert more energy on the pole during the swinging action.

All content from Kiddle encyclopedia articles (including the article images and facts) can be freely used under Attribution-ShareAlike license, unless stated otherwise. Cite this article:
Sergey Bubka Facts for Kids. Kiddle Encyclopedia.