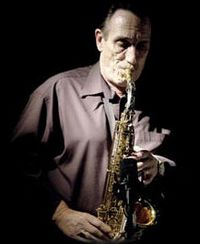 In 2005 he recorded the album Janus with the Lyric String Quartet.

King made appearances on albums by the pop group Everything But The Girl and on North Marine Drive by Ben Watt, who was a member of the group.

All content from Kiddle encyclopedia articles (including the article images and facts) can be freely used under Attribution-ShareAlike license, unless stated otherwise. Cite this article:
Peter King (saxophonist) Facts for Kids. Kiddle Encyclopedia.