Peter Regin Jensen (born 16 April 1986) is a Danish professional ice hockey player who is currently serving as captain for Jokerit of the Kontinental Hockey League (KHL). He was drafted by the Ottawa Senators in the third round (87th overall) of the 2004 NHL Entry Draft and played his first five NHL seasons with the organization. Prior to his NHL career he played professionally in Europe. 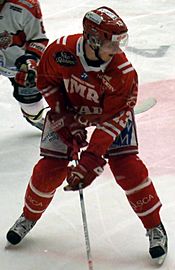 Regin played for the Herning Blue Fox of the Danish Elite League from 2002 to 2005, winning Rookie of the Year honours in 2004. In 2004, he was drafted by the NHL's Ottawa Senators using the third-round draft pick of the Colorado Avalanche, received in a trade for Shane Hnidy with the Nashville Predators. He played one more season with Herning. In 2005, he joined Timrå IK in the Swedish Elitserien league. He played three seasons for Timrå, increasing his goal and point production in each season.

On 2 June 2008, Regin signed a multi-year entry-level contract with the Ottawa Senators. He was assigned to the Senators' minor league affiliate, the Binghamton Senators for the 2008–09 season. Due to injuries in Ottawa, he was called up and made his NHL debut on 20 January 2009, in a game against the Washington Capitals. He was returned to Binghamton one day later, registering no points in his NHL debut. Following the NHL All-Star break, he was recalled by Ottawa and scored his first NHL goal, the game-winner, in his third NHL game on 29 January against Chris Mason and the St. Louis Blues.

Since beginning his NHL career, Regin has contributed to the rise in popularity of ice hockey in his native Denmark.

In July 2010, Regin was re-signed to a two-year contract extension worth US$2 million by the Senators.

His 2010–11 season was a disappointing one as he registered only 3 goals and 17 points in 55 games, before he suffered a season-ending shoulder dislocation in a game against the Toronto Maple Leafs when he was pushed into the boards by Toronto's Joey Crabb on 19 February 2011.

In April 2012, the Senators announced that Regin was re-signed to a further one-year, one-way contract.

On 5 July 2013 he signed a one-year deal with the New York Islanders. However, he was traded on 6 February 2014 to the Chicago Blackhawks along with Pierre-Marc Bouchard in exchange for a 2014 fourth-round draft pick.

On 1 July 2014, Regin was re-signed by the Blackhawks on a one-year contract. During the Blackhawks' training camp, Regin was assigned, along with goaltender Michael Leighton, to their AHL affiliate, the Rockford IceHogs, after clearing waivers.

All content from Kiddle encyclopedia articles (including the article images and facts) can be freely used under Attribution-ShareAlike license, unless stated otherwise. Cite this article:
Peter Regin Facts for Kids. Kiddle Encyclopedia.