Philadelphia is a city in and the county seat of Neshoba County, Mississippi, United States. The population was 7,477 at the 2010 census. 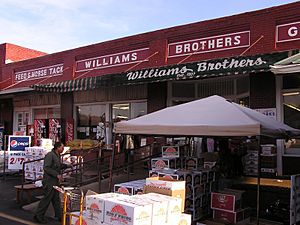 The region of Neshoba County and the surrounding counties was the heart of the Choctaw Nation from the 17th century until the removal of most of the people in the 1830s. European-American settlers began to arrive in numbers in the early decades of the nineteenth century, after French, British and Spanish traders developed business relationships with the Choctaw.

Philadelphia is incorporated as a municipality; it was given its current name in 1903, two years before the railroad brought new opportunities and prosperity to the town. The history of the town and its influences- social, political and economic- can be seen in the many points of interest within and beyond the city limits. These range from the large ceremonial Indian mound and cave at Nanih Waiya, built approximately 1700 years ago and sacred to the Choctaw; to the still thriving Williams Brothers Store, a true old-fashioned general store founded in 1907 and featured in National Geographic in 1939 as a source of anything from “needles to horse collars”, and still offering everything from bridles, butter and boots to flour, feed and fashion.

Many thousands of years ago, Paleo-Indians lived in what today is referred to as the American South. The Native American Choctaw people are descended from the Mississippian and other societies in the Mississippi river valley encountered by Spanish explorers in the early 16th century. The Choctaw arose as a distinct people in the early 17th century and had trade relations with the French, British and Spanish during the colonial period.

After the United States victory in the American Revolutionary War, Choctaw lands Alabama and Mississippi were encroached on by European-American settlers. Trying to create a boundary, they ceded land in several treaties with the United States, but settlers kept arriving in their territory. By 1830, after passage of the Indian Removal Act, the Choctaw were forced to choose between removal to west of the Mississippi River, or becoming U.S. citizens and submitting to federal and state laws in Mississippi. Choctaw chiefs realized that removal was inevitable and had decided that military resistance was futile.

Greenwood LeFlore, elected the Principal Chief of all three divisions that year, negotiated and signed the Treaty of Dancing Rabbit Creek in an effort to get the best arrangements for the Choctaw that he could. They were granted the largest amount of land in Indian Territory, in the fertile southeast, in exchange for ceding the remainder of their traditional homeland in Mississippi and Alabama.

They also were granted the option of remaining on reserved land in Mississippi as United States citizens, but the government did not give them all the land that they believed they deserved. The treaty represented one of the largest transfers of land that was signed between the US government and Native Americans without being instigated by warfare. The migration became known as the Choctaw Trail of Tears.

On August 3, 1980, Ronald Reagan gave his first post-convention speech at the Neshoba County Fair after being officially chosen as the Republican nominee for President of the United States. He said, "I believe in states' rights ... I believe we have distorted the balance of our government today by giving powers that were never intended to be given in the Constitution to that federal establishment." He went on to promise to "restore to states and local governments the power that properly belongs to them".

Marcus Dupree played high school football for the Philadelphia High School Tornadoes from 1978 to 1981. He was an outstanding athlete who was widely recognized for his achievements. Dupree scored 87 touchdowns total during his playing time in high school, breaking the record set by Herschel Walker by one. In 1981, Marcus's final High School football game was played at Warriors Stadium of the tribal high school at the Choctaw Indian Reservation. The author Willie Morris described the audience at Dupree's final high school game as "the most distinctive crowd I had ever seen ... four thousand or so people seemed almost an equal of mix of whites, blacks, and Indians ... "

In May 2009, Philadelphia elected its first black mayor, James A. Young, a 53-year-old Pentecostal preacher and a former county supervisor. He defeated Rayburn Waddell, a white, three-term incumbent, by 46 votes in the Democratic primary (there was no Republican challenger). Jim Prince, publisher of the local The Neshoba Democrat newspaper said, "Philadelphia will always be connected to what happened here in 1964, but the fact that Philadelphia, Mississippi, with its notorious past, could elect a black man as mayor, it might be time to quit picking on Philadelphia, Mississippi." Young's campaign staff credited Barack Obama's presidential campaign for increasing registration of black and young voters in Philadelphia, many of whom voted for Young. Young's term began July 3, 2009. 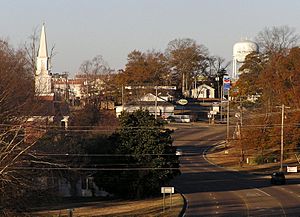 Philadelphia, Mississippi seen from the east end of town. 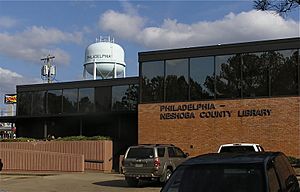 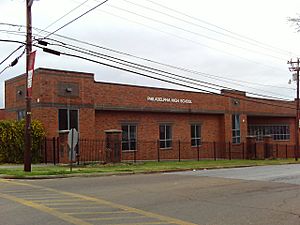 Cable television services for the city of Philadelphia are contracted to MetroCast Communications. Electrical utilities, as well as water and sewer service, are provided by the City of Philadelphia as Philadelphia Utilities. The natural gas utility is CenterPoint Energy. AT&T is the local telephone service provider.

All content from Kiddle encyclopedia articles (including the article images and facts) can be freely used under Attribution-ShareAlike license, unless stated otherwise. Cite this article:
Philadelphia, Mississippi Facts for Kids. Kiddle Encyclopedia.