The Pierhead Building (Welsh: Adeilad y Pierhead) is a Grade I listed building of the National Assembly for Wales in Cardiff Bay, Wales. It stands as one of the city of Cardiff's most familiar landmarks and was built in 1897 as the headquarters for the Bute Dock Company.

The clock on the building is unofficially known as the "Baby Big Ben" or the "Big Ben of Wales", and also serves as a Welsh history museum. The Pierhead Building is part of the estate of the National Assembly for Wales, which also includes the Senedd and Ty Hywel.

The Grade I listed building was built in 1897 and designed by the English architect William Frame. It was a replacement for the headquarters of the Bute Dock Company which burnt down in 1892. Frame's mentor was William Burges, with whom Frame worked on the rebuilding of Cardiff Castle and Castell Coch until Burges's death in 1881.

The Bute Dock Company was renamed the Cardiff Railway Company in 1897. A coat of arms on the building's façade bears the company's motto "wrth ddŵr a thân" (by water and fire) encapsulating the elements creating the steam power which transformed Wales.

The Pierhead became the administrative office for the Port of Cardiff in 1947.

The 1897 clock mechanism, by William Potts & Sons of Leeds, was removed, being replaced with an electronic motor, and auctioned off by British Rail and sold to an American collector in 1973. It was returned to Cardiff in 2005 and, in 2011 was restored by Smith of Derby Group and installed as a piece of contemporary art created by artist Marianne Forrest in Cardiff city centre.

Incorporating a French-Gothic Renaissance theme, the Pierhead boasts details such as hexagonal chimneys, carved friezes, gargoyles, and a highly ornamental and distinctive clock tower. Its exterior is finished in glazed terracotta blocks supplied at the end of the nineteenth century by JC Edwards & Co of Acrefair near Ruabon in Wrexham – once described as one of the most successful producers of terracotta in the world. These features, along with the Pierhead's role in the development of the docks, Cardiff and industrial Wales earned it the status of a Grade One listed building. 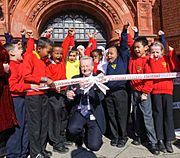 The 2010 re-opening of the Pierhead Building by Dafydd Elis-Thomas, then the Presiding Officer of the National Assembly

On 1 March 2010, the building re-opened again to the public as a Welsh history museum and exhibition. It contains a number of films and exhibits exploring Welsh history as well as spaces to function as venues for public debate and assembly-sponsored events, where people can express their views about what happens in the nearby National Assembly building itself.

Artefacts on display include the original binnacle (the stand housing the ship's compass) from Scott of the Antarctic's ship Terra Nova, and the Pennal Letter sent by Prince of Wales Owain Glyndŵr to Charles VI of France in 1406. Another feature is an audio-visual display of Welsh heroes who have made significant contributions to Wales' cultural and political identity, such as former Prime Minister David Lloyd George, fashion designer Laura Ashley and the late rugby player and broadcaster Ray Gravell.

Films and exhibits explore the history of Cardiff Bay from the Neolithic era onwards and show how iron ore and coal exports made Cardiff one of the busiest ports in the world. They describe the impact of the coming of railways from 1841, which meant goods could be transported as far in an hour as they would have been in a month using the canal system. They also illustrate how, following the crisis of a steep drop in demand for coal in the 1920s, and its decline as a port for container ships from the 1950s, Cardiff Bay entered a difficult period, ending with its regeneration at the century's close.

All content from Kiddle encyclopedia articles (including the article images and facts) can be freely used under Attribution-ShareAlike license, unless stated otherwise. Cite this article:
Pierhead Building Facts for Kids. Kiddle Encyclopedia.