Pinus edulis, the Colorado pinyon, two-needle piñon, pinyon pine, or simply piñon, is a pine in the pinyon pine group whose ancestor was a member of the Madro-Tertiary Geoflora (a group of drought resistant trees) and is native to the United States.

The range is in Colorado, southern Wyoming, eastern and central Utah, northern Arizona, New Mexico, western Oklahoma, southeastern California, and the Guadalupe Mountains in far western Texas. It occurs at moderate altitudes of 1,600–2,400 metres (5,200–7,900 ft), rarely as low as 1,400 m (4,600 ft) and as high as 3,000 m (9,800 ft). It is widespread and often abundant in this region, forming extensive open woodlands, usually mixed with junipers in the pinyon-juniper woodland plant community. The Colorado pinyon (piñon) grows as the dominant species on 4.8 million acres (19,000 km2 or 7,300 sq mi) in Colorado, making up 22% of the state's forests. The Colorado pinyon has cultural meaning to agriculture, as strong piñon wood "plow heads" were used to break soil for crop planting at the state's earliest known agricultural settlements.

There is one known example of a Colorado pinyon growing amongst Engelmann spruce (Picea engelmannii) and limber pine (Pinus flexilis) at nearly 3,170 metres (10,400 ft) on Kendrick Peak in the Kaibab National Forest of northern Arizona.

The piñon pine (Pinus edulis) is a small to medium size tree, reaching 10–20 feet (3.0–6.1 m) tall and with a trunk diameter of up to 80 centimetres (31 in), rarely more. The bark is irregularly furrowed and scaly. The leaves ('needles') are in pairs, moderately stout, 3–5.5 cm (1 1⁄8–2 1⁄8 in) long, and green, with stomata on both inner and outer surfaces but distinctly more on the inner surface forming a whitish band.

The species intermixes with Pinus monophylla sbsp. fallax (see description under Pinus monophylla) for several hundred kilometers along the Mogollon Rim of central Arizona and the Grand Canyon resulting in trees with both single- and two-needled fascicles on each branch. The frequency of two-needled fascicles increases following wet years and decreases following dry years. The internal anatomy of both these needle types are identical except for the number of needles in each fascicle suggesting that Little's 1968 designation of this tree as a variety of Pinus edulis is more likely than its subsequent designation as a subspecies of Pinus monophylla based entirely upon its single needle fascicle.

It is an aromatic species. Essential oil can be extracted from the trunk, limbs, needles, and seed cones. Prominent aromatic compounds from each portion of the tree include α-pinene, sabinene, β-pinene, δ-3-carene, β-phellandrene, ethyl octanoate, longifolene, and germacrene D.

The seeds are dispersed by the pinyon jay, which plucks them out of the open cones. The jay, which uses the seeds as a food resource, stores many of the seeds for later use, and some of these stored seeds are not used and are able to grow into new trees. The seeds are also eaten by wild turkey, Montezuma quail, and various mammals.

Colorado pinyon was described by George Engelmann in 1848 from collections made near Santa Fe, New Mexico on Alexander William Doniphan's expedition to northern Mexico in 1846.

An isolated population of trees in the New York Mountains of southeast California, previously thought to be Colorado pinyons, have recently been shown to be a two-needled variant of single-leaf pinyon from chemical and genetic evidence. Occasional two-needled pinyons in northern Baja California, Mexico have sometimes been referred to Colorado pinyon in the past, but are now known to be hybrids between single-leaf pinyon and Parry pinyon. 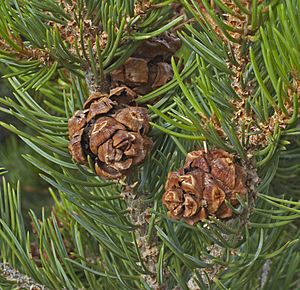 The edible seeds, pine nuts, are extensively collected throughout its range; in many areas, the seed harvest rights are owned by Native American tribes, for whom the species is of immense cultural and economic importance. They can be stored for a year when unshelled. One early legend asserts that the "tree of life" is a pinyon pine, rooted in ancient cultural sites found within areas of pinyon (piñon) Canyon, Colorado.

Archaeologist Harold S. Gladwin described pit-houses constructed by southwestern Native Americans c. 400–900 CE; these were fortified with posts made from Pinyon trunks and coated with mud.

The habitat destruction by deforestation of large areas of pinyon forests in the interests of cattle ranching, for habitat conversion to grazing rangeland, is seen by many as an act of major ecological and cultural vandalism.

Colorado pinyon is also occasionally planted as an ornamental tree and sometimes used as a Christmas tree.

The piñon pine (Pinus edulis) is the state tree of New Mexico.

All content from Kiddle encyclopedia articles (including the article images and facts) can be freely used under Attribution-ShareAlike license, unless stated otherwise. Cite this article:
Colorado pinyon Facts for Kids. Kiddle Encyclopedia.