The Pitt Rivers Museum is a museum displaying the archaeological and anthropological collections of the University of Oxford in England. The museum is located to the east of the Oxford University Museum of Natural History, and can only be accessed through that building.

The museum was founded in 1884 by Augustus Pitt Rivers who donated his private collection to the University of Oxford with the condition that a permanent lecturer in anthropology must be appointed. Museum staff are involved in teaching Archaeology and Anthropology at the University even today. The first Curator of the museum was Henry Balfour. A second stipulation in the Deed of Gift was that a building should be provided to house the collection and used for no other purpose. The University therefore engaged Thomas Manly Deane, son of Thomas Newenham Deane who, together with Benjamin Woodward, had designed and built the original Oxford University Museum of Natural History building three decades earlier, to create an adjoining building at the rear of the main building to house the collection. Construction started in 1885 and was completed in 1886.

The original donation consisted of approximately 22,000 items; this has now grown to 500,000 items, many of which have been donated by travellers, scholars and missionaries.

On March 17, 2020, the museum shut due to the COVID-19 pandemic, but re-opened on September 22nd, 2020. The decision was made to remove the shrunken heads previously on display during this closure. The heads had been on display since the 1940s. 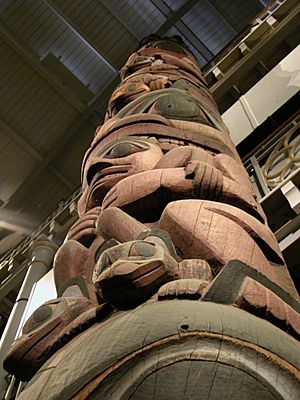 The museum's collection is arranged typologically, according to how the objects were used, rather than according to their age or origin. This layout owes a lot to the theories of Pitt Rivers himself, who intended for his collection to show progression in design and evolution in human culture from the simple to the complex. Whilst this evolutionary approach to material culture is no longer fashionable in archaeology and anthropology, the museum has retained the original organisation of the displays. The display of many examples of a particular type of tool or artifact, showing historical and regional variations, is an unusual and distinct feature of this museum. The museum has a high density of objects on display, and the displays are changed periodically.

At 11.36m high the Haida totem pole is the largest object on display in the museum. From a Haida community, it originally stood outside Star House in the village of Old Massett (Haida name Uttewas), on Graham Island, in British Columbia, Canada. The house was built around 1882 and belonged to chief Anetlas (c.1816–1893). The pole came to the Pitt Rivers Museum in 1901.

In 2004, the museum received £3,700,000 from the Higher Education Funding Council for England (HEFCE) to build a research annex adjoining the museum. Building work was completed in 2007, bringing the academic staff of the museum back to the site, and providing a laboratory for conservation of the specimens. The annex will not affect the Victorian displays of the museum.

The second phase of development began on 7 July 2008 necessitating the closure of the museum and galleries. The museum reopened on 1 May 2009. In this work, the 1960s exhibition gallery was dismantled, restoring the original view through to the museum's totem pole. Original display cases were returned to their original place at the front of the museum. The space upstairs vacated by these cases provides additional space for a Clore Duffield Education Centre. A new entrance platform allows visitors to enter on the same level as the Oxford University Museum of Natural History and improves access for wheelchair users and parents with pushchairs. The entrance platform provides re-located shop and reception areas. An environmental control system has also been installed.

The Pitt Rivers Museum, along with the Oxford University Museum of Natural History, won The Guardian newspaper's award for Family Friendly Museum of 2005.

In 2019, the Pitt Rivers Museum was finalist of the Art Fund Museum of the Year Award.

In recent years, the Pitt Rivers Museum has been called sector-leading in its work on decoloniality. Further details can be found on the website.

In September 2020, the Museum announced it has made a number of critical changes to its displays, including the removal from display of human remains and the installation of a new Introductory Case as an intervention in its permanent galleries that engages with the colonial legacy of the Museum. The Museum has also said that it would make changes to the labels to include stories "through the voices of artists and indigenous leaders.

As part of this process the Pitt Rivers Museum is meeting with originating communities to address errors and gaps in the information it stores, and to discuss repatriation. One of these is the Living Cultures initiative, a collaboration between the museum, a Maasai community based campaign group called Oltoilo Le Maa, and community development organisation InsightShare.

All content from Kiddle encyclopedia articles (including the article images and facts) can be freely used under Attribution-ShareAlike license, unless stated otherwise. Cite this article:
Pitt Rivers Museum Facts for Kids. Kiddle Encyclopedia.