Kids Encyclopedia Facts
This page is about the village in Ohio. For other uses, see Plain City (disambiguation).

Plain City is a village in Madison and Union counties in the U.S. state of Ohio, along Big Darby Creek. The population was 4,225 at the 2010 census. According to the official website, their mission statement is "to govern with integrity and fiscal responsibility providing quality services and programs to promote prosperity, safety and the well-being of our citizens and community". 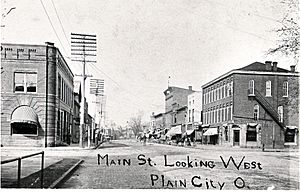 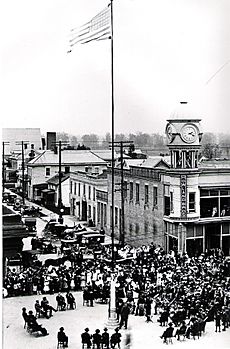 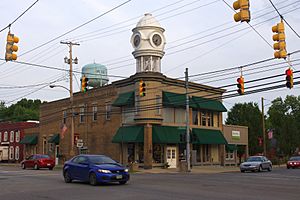 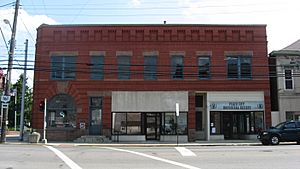 In 1814, Isaac Bigelow travelled to the area from Centre County, Pennsylvania to pay for land purchased from his uncle, then returned to Pennsylvania to study medicine with his father. He returned in 1817, and settled in the Pleasant Valley area in 1818. He hired a surveyor named David Chapman, and laid out the town of Westminster on June 11, 1818. At the time, Westminster lay wholly within Darby Township in Madison County. In 1820, when Union County was formed, the county line was moved to the middle of Westminster. In 1823, the previous survey was resurveyed, additional territory was incorporated, and the town's name was changed from Westminster to Pleasant Valley. From 1832 to 1851, there were six additions to the town limits. In 1851, due to there already being another town in Ohio named Pleasant Valley, the town changed its name to Plain City.

Previous to 1850, Plain City was a smaller trading point than Amity, but after a trunk-line for the Atlantic and Great Western Railroad was laid through its corporation limits, business and manufacturing increased dramatically. The corporation limits were extended in 1868. As of 1875, the town contained five churches, one newspaper, one bank, one brick planing mill, one flour mill, four dry goods stores, three drug stores, three grocery stores, one jewelry store, one hotel, one carriage and wagon store, two harness shops, two wagon shops, two blacksmith shops, and a boot and shoe store.

The Farmers National Bank, a building at the intersection of State Route 161 and Chillocothe Street was built in 1902, and was listed on the National Register of Historic Places in 1995. The town clock, located at the same intersection, was dedicated on November 15, 1902.

Plain City and the surrounding area have a strong German and agricultural heritage. An Amish settlement at Plain City, that was founded in 1896, finally dissolved in 2011.

Plain City is located at the juncture of U.S. Route 42 and State Route 161, eight minutes from Dublin and 12 minutes from Marysville. 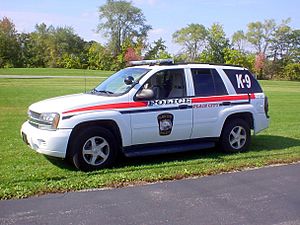 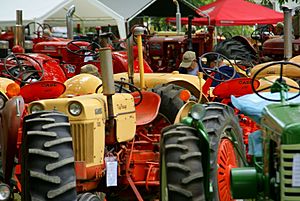 Each year, during the month of July, the village hosts the Miami Valley Steam Threshers show at Pastime Park, which showcases antique tractors, steam threshers and other farm equipment.

All content from Kiddle encyclopedia articles (including the article images and facts) can be freely used under Attribution-ShareAlike license, unless stated otherwise. Cite this article:
Plain City, Ohio Facts for Kids. Kiddle Encyclopedia.