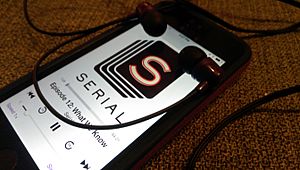 The Serial podcast being played through an iPhone

The logo used by Apple to represent podcasting in its iTunes software.

Many podcasts are similar to broadcast radio news or discussion programs. Some use other formats such as a continuing story, comedy show, lecture, or audiobook.

Podcasts can be found for almost anything. Radio shows, do it yourself projects, special interest groups, religious sermons, comedy sketches, cartoons, and just about anything else can be found. Once a podcast is found, it can be subscribed to like a magazine or newspaper and then downloaded. Once it is downloaded, it can be stored on an MP3 player to be listened to.

Podcasting has become so popular that many people who write for magazines or report news on television have also been putting out their own podcasts.

All content from Kiddle encyclopedia articles (including the article images and facts) can be freely used under Attribution-ShareAlike license, unless stated otherwise. Cite this article:
Podcast Facts for Kids. Kiddle Encyclopedia.