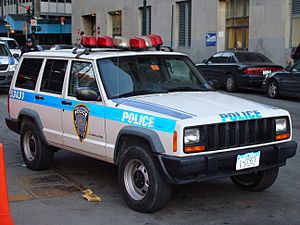 A police vehicle of the PAPD

On February 26, 1993 the Port Authority's World Trade Center was the target of a terrorist attack, and of the more successful September 11 attacks in 2001.

The area had over 50,000 employees and 70,000 visitors per day; the work of emergency personnel including the Port Authority Police, the New York City Police Department, the New York City Fire Department, New York City EMS, New York State Court Officers, Federal Agents and many others helped to lower the deaths from the attack. The Port Authority Police had the biggest loss of police personnel at a single time in American history: 37 police officers along with one police dog were killed on September 11th.

All content from Kiddle encyclopedia articles (including the article images and facts) can be freely used under Attribution-ShareAlike license, unless stated otherwise. Cite this article:
Port Authority Police Facts for Kids. Kiddle Encyclopedia.