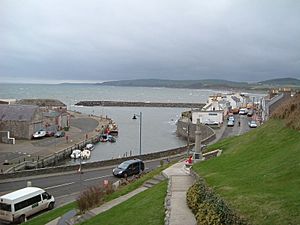 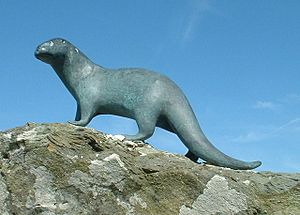 Maxwell's Otter. The memorial to Gavin Maxwell - a very appropriate statue of an otter, beautifully sited on a promontory overlooking Luce Bay. 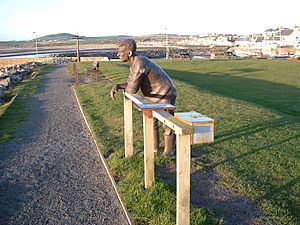 Port William is a small fishing village in the parish of Mochrum, Wigtownshire, Dumfries and Galloway, in south-west Scotland. It is surrounded by the hamlets of Elrig, Mochrum and Monreith.

The village has a population of approximately 460 and lies 23 miles east of the town of Stranraer, on the coast of Luce Bay. It looks directly over to the Mull of Galloway, the most southerly point of the Scottish mainland and, on a clear day, both the Isle of Man, and Ireland are visible from the rugged coastline.

The village has one of the largest carnivals in south-west Scotland at the beginning of August.

In 2007 it was awarded the Leader+ Most Vibrant Village award and in 2008 won the Southern Scotland Regional Title of the Calor Scottish Village of the Year award.

Port William's community has worked together to achieve many successful projects. Following the withdrawal of the RNLI lifeboat, Port William raised the necessary funds and volunteers to buy and staff an Inshore Rescue Boat in about 1982, which still operates today, covering Luce Bay, Wigtown Bay and the area between South West Scotland and the Isle of Man. The village formed one of the first Community First Response Teams in Scotland and has helped to set up other teams in the area. The Kings Green Caravan Park is community owned and employs two wardens. Charges are kept low to encourage tourism and all profits come back into the community. In 2010, the caravan park opened its laundry and dishwashing facility (an extension built onto the newly constructed toilet block).

In the 17th and 18th centuries Port William was known as much for the illicit activities of its smugglers as for the legitimate trade of its port.

The original settlement was known as Killantrae, meaning 'The Church on the Beach' in Gaelic, and was probably founded not long after St Ninian arrival in nearby Whithorn towards the end of the 4th century.

Killantrae was swept away following the intervention of developer and landlord Sir William Maxwell, 5th Baronet, of Monreith House. In the five years until 1776 he built an entirely new village, complete with a good harbour and was renamed Port William. One of the earliest buildings still standing was the corn mill, located on the side of the Killantrae burn to take advantage of the power provided by its water. Port William is an example of a planned village, lying on the eastern shore of Luce Bay in Galloway. The harbour, built for the convenience of his tenant farmers, was one of the first in western Galloway.

Monreith House, a category A listed Georgian mansion is located 1.5 kilometres (0.93 mi) east of the village.

The harbour was extended in 1790 and again in 1848, and it continued to have commercial importance until the end of the First World War.

Further work was done to protect the harbour in the 1980s by building a breakwater to the western side of the harbour.

It then steadily became what you see today, a haven for small fishing and leisure craft.

A recent reflection of Port William's seafaring heritage is found in the life-size fisherman's statue overlooking the harbour. This was once made of concrete, but following a public appeal it has been remade in bronze. The statue was part-funded by the millennium lottery fund. In front of the statue is a plaque with the first verse of the poem Leisure by W. H. Davies.

All content from Kiddle encyclopedia articles (including the article images and facts) can be freely used under Attribution-ShareAlike license, unless stated otherwise. Cite this article:
Port William, Dumfries and Galloway Facts for Kids. Kiddle Encyclopedia.