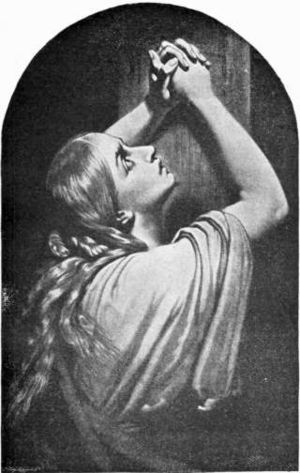 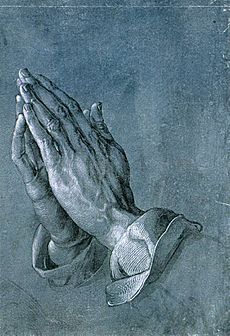 Prayer is a communication to God. Many believe their prayers are answered and evidence of it is primarily reported in the Old and New Testament. Later miracles and graces have been reported by the Church and by common people. Prayer is done by those who trust the power of word and thought. Jesus taught people to say the Lord's Prayer.

Prayer can be spoken, silent (no talking), or in a song. It can be used to praise God or to ask for something including help and forgiveness. Prayers can be said over and over again as in a Rosary or just once. The Rosary includes Lord's Prayer and several others. . Sister Lucia of Fatima said that Virgin Mary "in these last times in which we live has given new efficacy in the recitation of the Holy Rosary" and that " She has given this efficacy to such an extent that there is no problem, no matter how difficult it is, whether temporal or above all spiritual, in the personal life of each one of us, of our families … that cannot be solved by the Rosary".

Islamic prayer, or salat is a duty to be performed five times per day. Hinduism has prayer to various divinities or holy beings. Some people say that prayers for sick people bring them health.

All content from Kiddle encyclopedia articles (including the article images and facts) can be freely used under Attribution-ShareAlike license, unless stated otherwise. Cite this article:
Prayer Facts for Kids. Kiddle Encyclopedia.