Prince Leopold Island is an island in the Qikiqtaaluk Region of Nunavut, Canada. It is located in Lancaster Sound at the junction of Prince Regent Inlet and Barrow Strait. Somerset Island is situated 13 km (8.1 mi) to the southwest; Port Leopold is the closest landmark.

First named Prince Leopold's Isles by William Parry during his expedition of 1819, after then Prince Leopold of Saxe-Coburg-Saalfeld (the future King Leopold I of Belgium), maternal uncle and adviser of Queen Victoria. 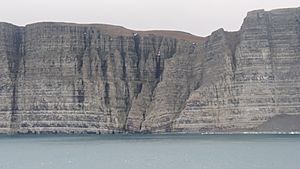 Cliffs along the south-west face of Prince Leopold Island, September 2019 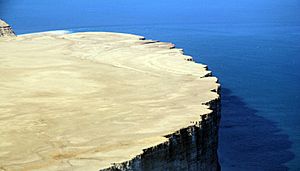 Closeup of the cliffs 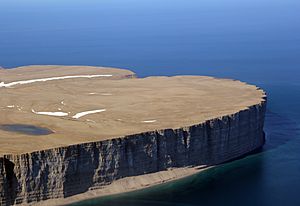 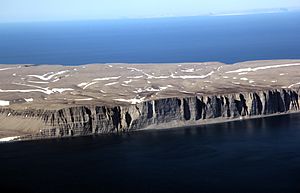 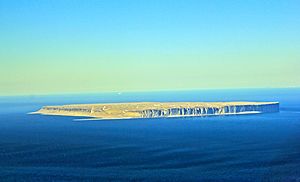 Large numbers of thick-billed murres, northern fulmars and black-legged kittiwakes breed on the cliff ledges, arriving in the vicinity in May or early June and departing by mid-September. The island is the most important station for breeding marine birds in the Canadian Arctic, having larger numbers and a greater diversity of species than any other site. Intensive studies of the breeding seabirds were carried out in 1975-77 and in a dozen subsequent years, providing evidence of how ice conditions affect the breeding birds.

All content from Kiddle encyclopedia articles (including the article images and facts) can be freely used under Attribution-ShareAlike license, unless stated otherwise. Cite this article:
Prince Leopold Island Facts for Kids. Kiddle Encyclopedia.