Prince Louis of Cambridge (Louis Arthur Charles; born 23 April 2018) is a member of the British royal family. He is the third and youngest child and second son of Prince William, Duke of Cambridge, and Catherine, Duchess of Cambridge. He is fifth in the line of succession to the British throne.

Kensington Palace announced on 4 September 2017 that the Duke and Duchess of Cambridge were expecting their third child. A son was born at 11:01 BST (10:01 UTC) on 23 April 2018. He was first seen in public seven hours after his birth, outside the Lindo Wing of St Mary's Hospital. On 27 April 2018, it was announced that the baby had been named Louis Arthur Charles, the first and last names honouring his paternal great-great-great-uncle Lord Mountbatten and his paternal grandfather the Prince of Wales, respectively. Louis is pronounced LOO-ee.

On 9 July 2018, Prince Louis was baptised by the Archbishop of Canterbury in the Chapel Royal at St James's Palace, using water from the River Jordan according to tradition. Louis's godparents are Nicholas van Cutsem, Guy Pelly, Harry Aubrey-Fletcher, Lady Laura Meade, Hannah Gillingham Carter, and Lucy Middleton. The christening gown is a replica of the original made for Queen Victoria's first child in 1841. It was created in 2008 and used for every royal christening since. The font was also first used in 1841. 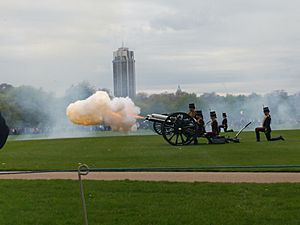 The Gun Salute in Hyde Park, London to mark the birth of Louis

Louis is, from birth, a prince of the United Kingdom, entitled to the style of Royal Highness under letters patent issued by his great-grandmother, Queen Elizabeth II, on 31 December 2012, which gave the title and style to all children of the Prince of Wales's eldest son. He is thus styled "His Royal Highness Prince Louis of Cambridge".

Prince Louis is fifth in the line of succession to the British throne, behind his grandfather, father and older siblings, Prince George and Princess Charlotte. Following the implementation of the Perth Agreement, which replaced male-preference primogeniture with absolute primogeniture, he is the first British prince to be ranked behind an elder sister in the line of succession.

All content from Kiddle encyclopedia articles (including the article images and facts) can be freely used under Attribution-ShareAlike license, unless stated otherwise. Cite this article:
Prince Louis of Cambridge Facts for Kids. Kiddle Encyclopedia.