Priory of St. Andrews of the Ards facts for kids

The Priory of St. Andrews of the Ards (Blackabbey) was a Benedictine Abbey at Stogursey in Somerset.

Originally the area was known as Stoke and by 1086 was owned by William de Falaise following the Norman Conquest. He had recently married Geva, daughter of Serlo de Burci, and widow of Martin "de Wallis". Early in the 12th century, William and Geva's daughter, Emma, was betrothed to William de Courcy, and the couple received the manor of Stoke upon their wedding. The manor was renamed Stoke Courcy, and is now known as Stogursey.

To preserve the Falaise family's association with Normandy the priory was donated as a cell to the Benedictine Abbey of St Mary at Lonlay. Within a few years, a group of monks were living in Stogursey and had built their own Priory around 1100–1107, which was known as "The Priory of St. Andrews in Stogursey".

The descendants of Emma and William took their name from the village, and became known as de Gursey, de Curci, or de Courcy. The most well-known member of the family was John de Courcy, who made himself virtual Prince of Ulster after conquering it in 1177. He captured the Counties of Antrim and Down. Around 1183–84, he granted to the Priory of St. Andrews in Stogursey "Ten Caracutes of land and all its appurtances in the Country of Lart or The Ardes".

In 1204 the Benedictine Priory was built and was called "The Priory of St. Andrews of the Ards". Over the years this Priory became better known as Blackabbey on account of the colour of the clothes worn by the monks.

The abbey dwindled over the years and was repeatedly taken into the king's hands, at one time let to one of the burgesses, Johannes Bakeler (the town's MP). It was appropriated by the crown around 1440 and Henry VI presented the endowments of Stogursey to "the College of the Blessed Mary of Eton beside Windsor" (Eton College) which he had founded a few years earlier. 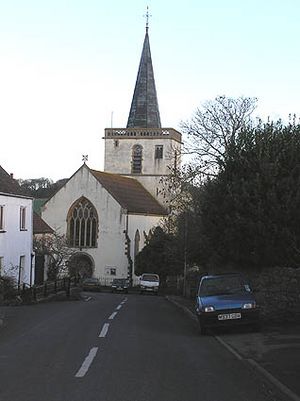 Today virtually nothing remains of the abbey, apart from the Church of St Andrew, which also served the village, and the dovecote. The church has been designated by English Heritage as a grade I listed building. The site may overlie an earlier Saxon establishment, and is one of the largest in West Somerset. The church retains elements of the Norman architecture (notably the tower and transepts), and the original apsidal ends to the transepts and chancels. The thatched, circular medieval dovecote was rebuilt in 1925 apart from the steps.

All content from Kiddle encyclopedia articles (including the article images and facts) can be freely used under Attribution-ShareAlike license, unless stated otherwise. Cite this article:
Priory of St. Andrews of the Ards Facts for Kids. Kiddle Encyclopedia.