Province of Trieste facts for kids 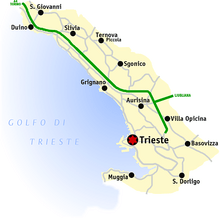 Map of the Province of Trieste.

The Province of Trieste was a province in the autonomous Friuli-Venezia Giulia region of Italy. Its capital is the city of Trieste. It had an area of 212 square kilometres (82 sq mi) and a total population of 234,668 (as of June 2016). It had a coastal length of 48.1 kilometres (29.9 mi). There were 6 communes in the province.

After the dissolution of the Western Roman Empire, the area of the province of Trieste was ruled by the Ostrogoths, Eastern Romans (Byzantines), Lombards and by the Franks. With the advent of the Habsburgs (13th century) the territory was divided between the lords of Duino, Trieste, San Dorligo della Valle and Muggia. During the reign of Maria Theresa of Austria and, subsequently, Joseph II, the maritime trades were increased with institution of the free port.

In 1809, the area was ceded to France after the defeat of Austria in that year. After the French definitive defeat, the communes of Duino, Aurisina, Sgonico and Monrupino, which used to be part of Carniola, were annexed to that of Gorizia and Gradisca, while Trieste became a direct city of the Austrian Empire. San Dorligo della Valle and Muggia became part of Istria.

World War I left the territory of the province almost untouched, although fierce battles were fought just on its north-westernmost edges.

The whole area was occupied by Italy in November 1918, in the aftermath of Austria's defeat in World War I. It was officially annexed to Italy with the treaty of Rapallo of 1920, which also assigned all of the former Austrian Littoral to Italy.

After the end of World War II, the Free Territory of Trieste was established as a free state on 15 September 1947. On 26 October 1954, Italy and Yugoslavia came to an understanding whereby the territory de facto was divided between the two states. Zone A of the free state became the new Province of Trieste and Zone B was to be administered by Yugoslavia. The Province of Trieste formally became a part of Italy on 11 October 1977, by the Treaty of Osimo.

The province was abolished on 30 September 2017.

Italian is spoken within the whole province. In the city of Trieste, many people speak Triestine, a dialect of Venetian. Tergestine, an archaic dialect of Friulian, was spoken in Trieste and in Muggia, but became completely extinct by the mid-19th century.

All content from Kiddle encyclopedia articles (including the article images and facts) can be freely used under Attribution-ShareAlike license, unless stated otherwise. Cite this article:
Province of Trieste Facts for Kids. Kiddle Encyclopedia.