Province of Verbano-Cusio-Ossola facts for kids

Verbano-Cusio-Ossola (Italian: Provincia del Verbano Cusio Ossola) is the northernmost province in the Italian region of Piedmont. It was created in 1992 through the fusion of three geographical areas which had previously been part of the Province of Novara. The area flanking the western shore of Verbano (or Lago Maggiore) forms the eastern part of the province; Cusio (or Lago d’Orta) and its environs form the southern part; while the north and west of the province consists of the Ossola, a region of Alpine mountains and valleys. The ISO code for the province is VB.

The province has a total population of some 160,000, distributed over an area of 2,255 square kilometres (871 sq mi), with the biggest population centres being its capital Verbania on the shores of Lago Maggiore, Domodossola the main town of the Ossola, and Omegna at the northern end of Lago d’Orta. 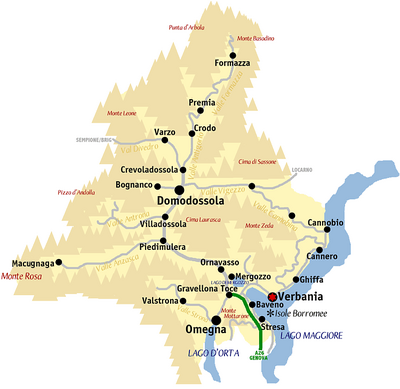 Map of the province

There are 77 comuni in the province.[1] The largest by population are:

The top eight countries of origin of the inhabitants of Verbano-Cusio-Ossola with foreign citizenship at December 31, 2010 were:

All content from Kiddle encyclopedia articles (including the article images and facts) can be freely used under Attribution-ShareAlike license, unless stated otherwise. Cite this article:
Province of Verbano-Cusio-Ossola Facts for Kids. Kiddle Encyclopedia.