Pseudonaja is a genus of venomous elapid snakes native to Australia. Species of this genus are known commonly as brown snakes and are considered to be some of the most dangerous snakes in the world; even young snakes are capable of delivering a fatal envenomation to a human.

Despite its common name, the king brown snake (Pseudechis australis) is not a brown snake, but a member of the genus Pseudechis, commonly known as black snakes.

These species and subspecies are recognized: 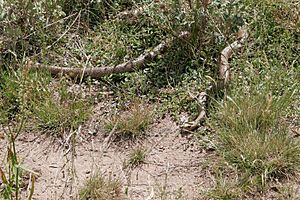 A photo of a dugite taken in Joondalup, Western Australia 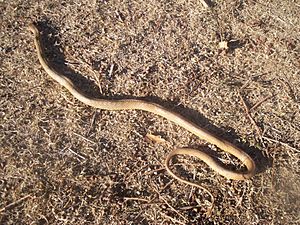 Brown snakes accounted for 41% of identified snakebite victims in Australia between 2005 and 2015, with 15 deaths recorded from 296 confirmed envenomations—far more than any other type of snake. Review of snakebite-related deaths in the National Coronial Information System from January 2000 to December 2016 revealed brown snakes were responsible for 23 of 35 deaths.

Brown snakes are easily alarmed and may bite if approached closely, handled, or threatened. Sudden, early collapse is often a symptom of envenomation by them. A prominent effect of envenomation is venom-induced consumption coagulopathy, which can lead to death. Renal damage may also rarely occur.

Other clinical signs include abdominal pain, breathing and swallowing difficulty, convulsions, ptosis, hemolysis, and hypotension from depression of myocardial contractility. Notably, brown snake envenomation does not result in rhabdomyolysis.

The venom fangs of snakes of the genus Pseudonaja are very short, and the average yield of venom per bite is relatively low — for P. textilis, P. nuchalis, and P. affinis, about 4.0 to 6.5 mg dry weight of venom. Therefore, most of the bites end up without serious medical consequences. Despite its toxicity, the smallest Pseudonaja, P. modesta, can even be considered harmless. Bites by the bigger species of Pseudonaja, especially P. textilis and P. nuchalis, are known for causing serious toxicosis and fatalities.

All content from Kiddle encyclopedia articles (including the article images and facts) can be freely used under Attribution-ShareAlike license, unless stated otherwise. Cite this article:
Pseudonaja Facts for Kids. Kiddle Encyclopedia.