Pseudosuchia ("false crocodiles") is one of two major divisions of archosaurs. It includes living crocodilians. It also includes archosaurs more closely related to crocodiles than to birds: "crocodile-line archosaurs".

Pseudosuchia is one of the two "daughter" clades of the Archosauria. It includes a group of superficially crocodile-like prehistoric reptiles from the Triassic period. These are relatives of living crocodiles, but more distant than the archosaurs.

The skull is often massive. The snout is narrow and often long. The neck is short and strong. The standing position may be a typical reptilian sprawl. More often it is an erect stance like dinosaurs or mammals, though done a different way. The body is often protected by two or more rows of armored scutes. Many crurotarsans get to lengths of three metres or more. 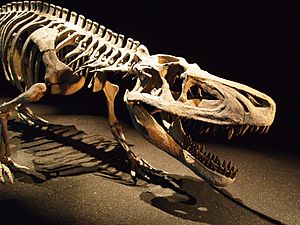 Pseudosuchians appeared in the late Lower Triassic. By the late Middle Triassic they were the dominant land carnivores. Their great time was the Upper Triassic, during which time their ranks included a number of carnivore groups, and one group of herbivores.

The end Triassic extinction caused the extinction of most pseudosuchians. The ancestors of modern-day crocodiles survived. A study published in 2010 suggests volcanic eruptions changed the climate, causing a mass extinction that wiped out the dinosaurs' main competitors. Furthermore, this allowed the dinosaurs to succeed them as the dominant terrestrial carnivores and herbivores.

As the Mesozoic progressed, more typically crocodile-like forms evolved. Dinosaurs were the dominant animals on land, but the proto-crocodiles flourished in rivers, swamps, and the oceans. These early crocodiles had far more diversity they have today. With the end Cretaceous extinction, the dinosaurs became extinct, except the birds, while the crocodilians continued with little change. Today, the crocodiles, alligators, and gharials are the surviving representatives of this lineage.

All content from Kiddle encyclopedia articles (including the article images and facts) can be freely used under Attribution-ShareAlike license, unless stated otherwise. Cite this article:
Pseudosuchia Facts for Kids. Kiddle Encyclopedia.