Quercus palustris, the pin oak or swamp Spanish oak, is a tree in the red oak section (Quercus sect. Lobatae) of the genus Quercus. Pin oak is one of the most commonly used landscaping oaks in its native range due to its ease of transplant, relatively fast growth, and pollution tolerance. Its distinctive shape is considered unique among hardwoods.

By the time the tree is 40 years old, it develops more rough bark with a loose, spreading canopy. This canopy is considered one of the most distinctive features of the pin oak: the upper branches point upwards, the middle branches are at right angles to the trunk, and the lower branches droop downwards.

The leaves are 5–16 cm (2–6 1⁄4 in) long and 5–12 cm (2–4 3⁄4 in) broad, lobed, with five or seven lobes. Each lobe has five to seven bristle-tipped teeth. The sinuses are typically u-shaped and extremely deep cut. In fact, roughly the same amount of sinus area exists as actual leaf area. The leaf is mostly hairless, except for a very characteristic tuft of pale orange-brown down on the lower surface where each lobe vein joins the central vein. Overall autumn leaf coloration is generally bronze, though individual leaves may be red for a time, and is not considered particularly distinctive. The acorns, borne in a shallow, thin cap, are hemispherical, 10–16 mm (13⁄32–5⁄8 in) long and 9–15 mm (11⁄32–19⁄32 in) broad, green maturing pale brown about 18 months after pollination. Unless processed using traditional methods, the acorn is unpalatable because the kernel is very bitter.

A fast-growing pioneer or riparian species, pin oak is relatively short-lived, with a maximum lifespan of 120 years against many oaks which can live several centuries. It is naturally a wetland tree, and develops a shallow, fibrous root system, unlike many oaks, which have a strong, deep taproot when young. It is confined to acidic soils, and does not tolerate limestone or sandy Florida soil, and grows at low altitudes from sea level up to 350 m (1,148 ft). The Latin specific epithet palustris means "of swamps".

A characteristic shared by a few other oak species, and also some beeches and hornbeams, is the retention of leaves through the winter on juvenile trees, a natural phenomenon referred to as marcescence. Young trees under 6 m (20 ft) are often covered with leaves year-round, though the leaves die in the fall, remaining attached to the shoots until the new leaves appear in the spring. As with many other oak species, dead pin oak branches stay on the tree for many years. 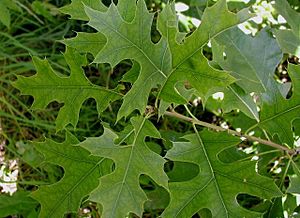 The Latin specific epithet palustris means "of marshland", referring to its natural habitat.

Q. palustris is mainly distributed in the eastern and central United States from Connecticut west to eastern Kansas, and south to Georgia, west to eastern Oklahoma and Kansas. It is also native in the extreme south of Ontario, Canada.

Pin oaks grow primarily on level or nearly level, poorly drained, alluvial floodplain and river-bottom soils with high clay content. They are usually found on sites that flood intermittently during the dormant season, but do not ordinarily flood during the growing season. They do not grow on the lowest, most poorly drained sites that may be covered with standing water through much of the growing season. However, they do grow extensively on poorly drained upland "pin oak flats" on the glacial till plains of southwestern Ohio, southern Illinois and Indiana, and northern Missouri. The level topography and presence of a claypan in the soil of these areas cause these sites to be excessively wet in winter and spring. 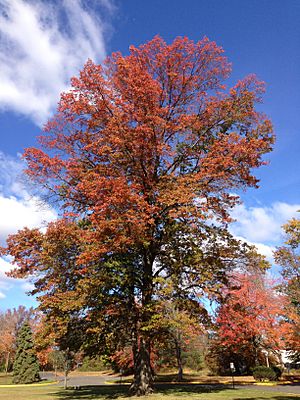 Like all oaks, flowering and leaf-out occur in late spring when all frost danger has passed. The flowers are monoecious catkins which, being self-incompatible, require the presence of another oak for pollination. Any species in the red oak group can serve as a pollinator, but in pin oak's natural range, this will usually be northern red oak or scarlet oak. Interspecies hybridization occurs freely. The acorns require two growing seasons to develop. 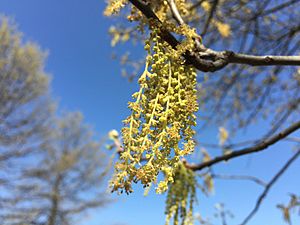 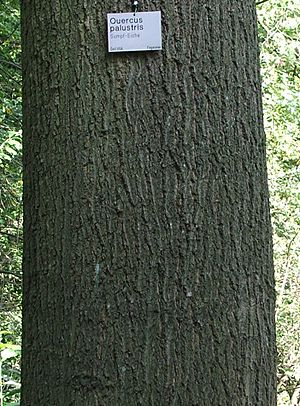 Pin oak is classed as intolerant of shade. It is less tolerant than elm, boxelder (Acer negundo), sweetgum, hackberry (Celtis occidentalis), and ash, but is more tolerant than eastern cottonwood and black willow. Pin oak usually grows in even-aged stands of dominant and co-dominant trees. Intermediate and suppressed trees in such stands usually die within a few years of being overtopped. Single pin oaks in mixed stands usually are dominants. Pin oak is considered a subclimax species. It persists on heavy, wet soils because it produces an abundance of acorns which, if released, grow faster on these sites than most of its competitors.

Pin oaks are also classified as allelopathic, meaning they crowd out or otherwise successfully compete with understory vegetation to survive. 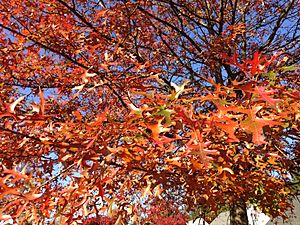 In its native range, pin oak is the most commonly used landscaping oak along with northern red oak due to its ease of transplant, relatively fast growth, and pollution tolerance. However, as it is naturally adapted to moist, acidic soils, it may develop a condition known as iron chlorosis on less suitable locations, causing the tree to shed leaves during the growing season and rot from the top down. Mature pin oaks are often too big to treat and this nutrient deficiency on alkaline soil may eventually kill them. The drooping lower branches can also be a problem, interfering with access for traffic and pedestrians.

It is also cultivated in parks and large gardens in the United Kingdom, and has gained the Royal Horticultural Society's Award of Garden Merit. 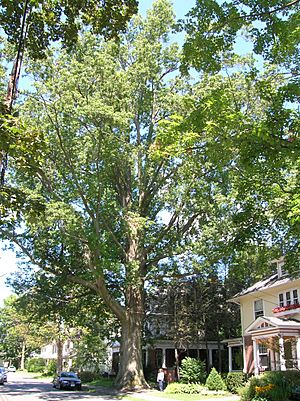 The wood is generally marketed as red oak, but is of significantly inferior quality, being somewhat weaker, often with many small knots. The wood is hard and heavy and is used in general construction and for firewood. The bark was used by some Native American tribes to make a drink for treatment of intestinal pain.

The name "pin oak" is possibly due to the many small, slender twigs, but may also be from the historical use of the hard wood for pins in wooden building construction.

The pin oak is the only known food plant of Bucculatrix domicola caterpillars.

Due to similarity in leaf shape, the pin oak is often confused with scarlet oak and black oak, and occasionally, red oak. However, it can be distinguished by its distinctive dead branches on the lower trunk ("pins"), and its uniquely shaped crown. The sinuses on pin oak leaves are also deeply cut, often covering just as much area as the leaf itself.

All content from Kiddle encyclopedia articles (including the article images and facts) can be freely used under Attribution-ShareAlike license, unless stated otherwise. Cite this article:
Pin oak Facts for Kids. Kiddle Encyclopedia.