Railroads in Omaha facts for kids 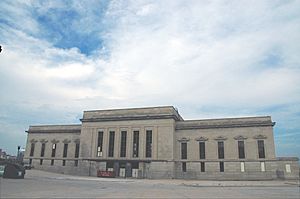 Railroads in Omaha, Nebraska have been integral to the growth and development of the city, the state of Nebraska, the Western United States and the entire United States. The convergence of many railroad forces upon the city was by happenstance and synergy, as none of the Omaha leaders had a comprehensive strategy for bringing railroads to the city.

Omaha was not supposed to be the center of the First Transcontinental Railroad; its neighbor across the Missouri River, Council Bluffs, Iowa was. In July 1862 President Abraham Lincoln signed the Pacific Railroad Act into law, which chartered a new organization called the Union Pacific Railroad. It was authorized to build a single line west from an "initial point" at the 100-degree meridian (near present-day Lexington, Nebraska). While the legislation seemed to favor Omaha, in 1863 Lincoln issued an executive order designating the terminal at Council Bluffs. Thomas C. Durant, the first head of the Union Pacific, arbitrarily decided the railroad should start at Omaha. 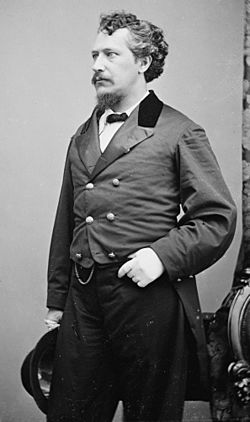 In 1863 ground was broken near Miller's Landing on the Missouri River for the First Transcontinental Railroad. Along with local financier Edward Creighton, George Francis Train was the promoter who was chiefly responsible for the city's landing the railroad. He was made rich by its location convenient to the land which he owned near Deer Park. Landing the railroad made the value of his property for development skyrocket. The Union Pacific Railroad has been headquartered in Omaha since its inception in 1867, starting with its fifty-year occupancy of the Herndon House in downtown. In 1872 Union Pacific opened the first bridge across the Missouri to Omaha. The historic Overland Route continues to run through the city.

The South Omaha Terminal Railway, a subsidiary of the Union Stock Yards Company of Omaha, was a spur line established to serve the Omaha Stockyards, which opened in the 1880s. It was transformed into the South Omaha Terminal Railway in the 1920s. Because of the Stockyards, by the 1880s Omaha was served by every major railroad in the country. Other railroads in the city included the Omaha Road, Omaha, Lincoln and Beatrice Railway, Omaha Southern Railroad, Kansas, Nebraska and Omaha Railway, Omaha and Republican Valley Railway, Omaha and South Western Railroad and Omaha, Abilene and Wichita Railway.

Making use of the constellation of railroads, the US Army built the Omaha Quartermaster Depot in Omaha in 1881. It supplied many military institutions in Nebraska and throughout the Western United States.

By 1955, Omaha had surpassed Chicago as the largest stockyards and packing center in the world. It processed thousands of animals per week. The packing plants received animals from 22 states, with most of the stock transported by railroad.

The Omaha Belt Line was a 15-mile (24 km) long railroad that circumnavigated the city starting in 1885. Carrying passengers and cargo, the rail was operated by the Missouri Pacific Railroad. The railroad also had branches into Lincoln, Wahoo and Nebraska City. The line was discontinued in the early 1960s.

There were several railroads that went from Omaha throughout the state of Nebraska and beyond. The Kansas, Nebraska and Omaha Railway ran from Omaha to southwestern Kansas, specifically to provide access from the cattle regions of present-day Oklahoma and Texas. 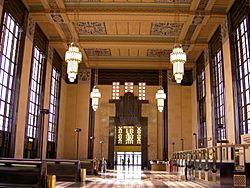 Inside the Union Station, the current home of the Union Pacific Railroad archives

In 1867 Ezra Millard, Andrew J. Hanscom, and Augustus Kountze formed the Omaha Horse Railway, the first horsecar in the city. The Omaha Cable Tramway Company was the city's only cable car. It started in 1884 and ended in 1895 after consolidating with the Horse Railway as the Omaha Street Railway Company. In 1896 the new company disbanded as competitors moved in. An electric car was built between Omaha and Benson specifically to promote that suburb's development during these years.

By 1901 Gurdon Wattles consolidated several of the older companies to organize the Omaha and Council Bluffs Streetcar Company. After receiving a 30-year franchise from the City of Omaha, the company established a mass transit system that covered the entire city, including commuter trains and interurbans. Streetcar lines operated in Omaha until 1955.

The Union Pacific Missouri River Bridge was the first bridge across the Missouri River. The East Omaha Bridge was originally opened in 1893, and rebuilt a decade later in 1903. The O Street Viaduct was built in 1885 and dismantled in 2001.

In 1939 Union Pacific, a major Hollywood film, was premiered in Omaha to celebrate the city's railroad heritage. The McKeen railroad motor car was a specialized self-propelled passenger car manufactured in Omaha.

The railroads continued to be important to freight, business and passenger travel into the 20th century. In 1947 the city's two stations had 114 passenger trains per day that connected all across the West and Midwest.

Railroads carried many of the tens of thousands of animals for processing at the packing plants, located near the stockyards and railroads. The city's stockyards and packing industry were the largest in the world by the mid-1950s, surpassing Chicago.

Railroads in the 21st century 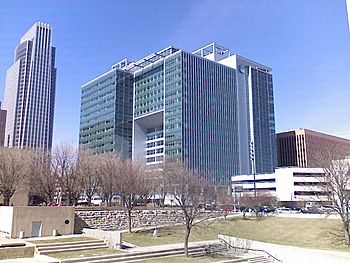 Today, the Omaha Rail and Commerce Historic District celebrates this connection, as do the listing of the Burlington Train Station and the Union Station on the National Register of Historic Places. Two large train engines have been placed as monuments and industrial art in Kenefick Park in South Omaha. They face Interstate 80, one of the successor transportation modes.

Omaha is the location of Union Pacific Railroad's corporate headquarters. Located downtown, Union Pacific Center is the largest building by square feet in the state of Nebraska, and the 4th tallest in Omaha. Amtrak, the national passenger rail system, provides service through Omaha, operating its California Zephyr daily in each direction between Chicago and Emeryville, California, across the bay from San Francisco.

All content from Kiddle encyclopedia articles (including the article images and facts) can be freely used under Attribution-ShareAlike license, unless stated otherwise. Cite this article:
Railroads in Omaha Facts for Kids. Kiddle Encyclopedia.