Ranunculus glacialis, the glacier buttercup or glacier crowfoot, is a plant of the family Ranunculaceae.

Ranunculus glacialis is an Arctic–alpine species, found in the high mountains of southern Europe (Alps, Pyrenees, Carpathians, Sierra Nevada) as well as on the Scandinavian peninsula, Iceland, the Faroe Islands, Jan Mayen, Svalbard and eastern Greenland.

It has been described as being the highest-ascending plant in the Alps, flowering at over 4,000 m.

A subspecies, Ranunculus glacialis subsp. chamissonis, is found on either side of the Bering Strait in Siberia, Russia and Alaska, U.S.. 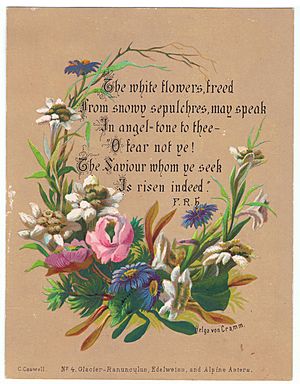 Chromolithograph of Glacier-Ranunculus, with Edelweiss, and Alpine Asters, by Helga von Cramm. (With verse by F.R.Havergal. c. 1870.

All content from Kiddle encyclopedia articles (including the article images and facts) can be freely used under Attribution-ShareAlike license, unless stated otherwise. Cite this article:
Glacier buttercup Facts for Kids. Kiddle Encyclopedia.