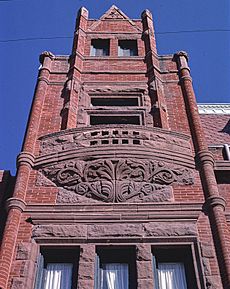 Red Cloud is a city in and the county seat of Webster County, Nebraska, United States. The population was 1,020 at the 2010 census.

The region of present-day Red Cloud was intermittently occupied and used as hunting grounds by the Pawnees until 1833. In that year, a treaty was signed in which the Pawnees surrendered their lands south of the Platte River. According to George Hyde, it is likely that the Pawnees did not realize that they were thereby giving up their lands, and that they were led to believe that they were only granting the Delawares and other relocated tribes permission to hunt in the area.

In 1870, the area that is now Webster County was opened to homesteaders. In that year, Silas Garber and other settlers filed claims along Crooked Creek, just east of the present-day city. In 1871, the town, named after the renowned Oglala Lakota leader Red Cloud, was voted county seat of the newly formed county. The city was platted in 1872.

The author Willa Cather lived in Red Cloud for several years with her family, starting in 1884 at age nine. She used the town as inspiration for several in her novels, including Black Hawk in My Ántonia. In addition to writing about the city Cather also published while living in Red Cloud. The Red Cloud Chief, the city's first newspaper, published early contributions from the author. Several 19th-century buildings described in her books are included in the Willa Cather Historic District, the largest district dedicated to an author that is listed on the National Register of Historic Places. Her childhood home is part of the district.

There were 480 households, of which 22.7% had children under the age of 18 living with them, 43.1% were married couples living together, 8.8% had a female householder with no husband present, 3.8% had a male householder with no wife present, and 44.4% were non-families. 40.0% of all households were made up of individuals, and 24.6% had someone living alone who was 65 years of age or older. The average household size was 2.04 and the average family size was 2.73.

The city owns and operates a swimming pool in its park, and it maintains a nine-hole golf course that is claimed to be the third-best such course in the state. 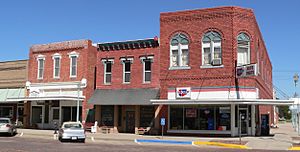 In fiction, Kim Wexler of the AMC drama Better Call Saul was born and raised in Red Cloud.

All content from Kiddle encyclopedia articles (including the article images and facts) can be freely used under Attribution-ShareAlike license, unless stated otherwise. Cite this article:
Red Cloud, Nebraska Facts for Kids. Kiddle Encyclopedia.