Red Dog is a 2011 Australian comedy-drama family film written by Daniel Taplitz, directed by Kriv Stenders and produced by Nelson Woss and Julie Ryan. It stars Koko as the title character, Josh Lucas, Rachael Taylor, and John Batchelor. The film is based on the true story of Red Dog and uses the 2002 novel Red Dog by Louis de Bernieres as the primary source. At the 2011 Inside Film Awards, Red Dog was nominated in nine categories and won seven, including best feature film. The film was also nominated for seven AACTA Awards and won for Best Film. The film was theatrically released on 4 August 2011 by Roadshow Film Distributors.

In 1979, a man named Thomas drives his truck into Dampier, Western Australia late one night, having transported a previously ordered statue of William Dampier to the town. Upon entering the town pub he sees the silhouettes of a group of men, one of whom is holding a gun. Believing it is a murder, he rushes into the next room, where he sees that the men are trying to put down an apparently sick dog. Unable to bring themselves to carry out the euthanasia, the men, with Thomas, retreat to the bar.

Publican Jack Collins tells him the dog's name is Red Dog and narrates his story. Upon arriving in Dampier in 1971, the dog befriends many of the employees of Hamersley Iron, who have a major iron ore excavation in progress. Various miners relate their stories of Red Dog to Thomas, but state that, while Red Dog was a dog for everyone, he had no real master.

The men then tell of an American, John Grant, a bus driver for Hamersley Iron who became Red's master. He eventually starts dating a woman named Nancy, a secretary at Hamersley Iron. After living in Dampier for two years, John proposes to Nancy. On the night of the engagement, John tells Red Dog to stay until he returns from Nancy's caravan. Early the next morning, John rides his motorcycle from Nancy's caravan, but he is killed in an accident on the way after hitting a kangaroo.

In the shock of John's accident, Nancy and the Hamersley men forget about Red Dog. Three days after the funeral, they find him still waiting where John told him to stay. After three weeks, Red Dog decides to look for John, first at Hamersley Iron, then the bar and other places where John was known to go, until all of Dampier is explored. He continues across much of the Australian North West Pilbara region, from Perth to Darwin. He is even rumoured to have caught a ship to Japan in search of John. Finally, the grief catches up to him, and he decides to return to Dampier. When he arrives, he returns to Nancy at the caravan park where she is staying, and she is overwhelmed to see him. The caretakers of the caravan park, however, do not allow dogs in the park, and threaten to shoot Red Dog. Nancy and John's friends at Hamersley then travel to the community of Dampier in support of Red Dog and, after a "civilized chat" with some of the miners, the caretaker and his wife leave, leaving their cat, Red Cat, behind. A great fight between Red Dog and Red Cat ensues, and in the end, they resolve their differences and become mates but still have their ups and downs.

Back in the present day, miner Jocko asks the gathered crowd why the town should have a statue of the town's namesake, William Dampier, when all he did in relation to the place was say that there were too many flies, and suggests that they should instead erect a statue of someone who represents the town – Red Dog. During the celebrations that follow, Red Dog gets up and walks out of the bar, unnoticed by everyone. Upon realizing that the sick dog has left, everyone in the town begins looking for him, eventually finding him lying dead in front of John's grave.

One year later, Thomas once again drives up to Dampier with a new puppy for Nancy, a new "Red Dog" and the whole town unveils a statue of Red Dog, a statue which still stands today. 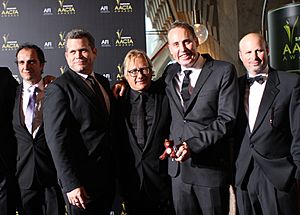 Red Dog (c. 1971 – 21 November 1979) was a Kelpie/cattle dog cross who was well known for his travels through Western Australia's Pilbara region. There is a statue in his memory in Dampier, which is one of the towns to which he often returned. Red Dog is believed to have been born in the town of Paraburdoo in 1971 and had a variety of names to those who knew him, including: Bluey, Tally Ho, and Dog of the Northwest. Soon after Red's death in 1979, Australian author Nancy Gillespie wrote and compiled anecdotes and poetry written by several people of the Pilbara region for her book Red Dog as did Beverly Duckett in her 1993 book Red Dog: The Pilbara Wanderer. Red Dog's statue has caught the attention of a number of people passing through Dampier including British author Louis de Bernières, who was inspired to write Red Dog, a book loosely based on Red's legend. A four-wheel-drive club has been named in his honour.

The film has not been as successful internationally as it was in Australia. The film opened at #25 in the United Kingdom, earning just £24,727 from 56 screens (24–26 February 2012) and opened at #5 at the New Zealand box office, earning NZ$124,447 from 72 screens. The film has been a DVD-only release in territories such as Germany and Argentina but has been acquired by independent distributor Arc Entertainment in a deal for all media in the United States, though there is "no word on a theatrical release date or strategy" in the announcement.

Red Dog has screened at numerous film festivals around the world including:

In March 2012 it was announced that the Red Dog film would be developed into a stage musical. The musical is being developed by Australian theatre producer John Frost and Red Dog producer Nelson Woss.

A prequel, titled Red Dog: True Blue, began filming in early 2015 for six weeks and was released on 26 December 2016. The film explores Red Dog's earlier days, as well as delving into the history of the Pilbara region. Due to Koko's death, Red Dog was recast.

A spin-off documentary, titled Koko: A Red Dog Story was released in 2019. The film explores the life of Koko, who was cast as Red Dog in the original film.

All content from Kiddle encyclopedia articles (including the article images and facts) can be freely used under Attribution-ShareAlike license, unless stated otherwise. Cite this article:
Red Dog (film) Facts for Kids. Kiddle Encyclopedia.