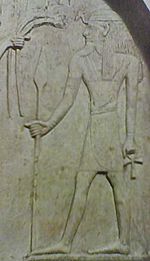 Resheph is a deity associated with plague in the ancient Canaanite religion. The originally Eblatie and Canaanite deity was adopted into ancient Egyptain religion in the late Bronze Age during the 18th Dynasty of Egypt as a god of horses and chariots.

All content from Kiddle encyclopedia articles (including the article images and facts) can be freely used under Attribution-ShareAlike license, unless stated otherwise. Cite this article:
Resheph Facts for Kids. Kiddle Encyclopedia.