Kids Encyclopedia Facts
This page is about the Austrian-German biochemist. For the American judge and politician, see United States House of Representatives elections in Michigan, 2010.

Richard Johann Kuhn ( 3 December 1900 – 1 August 1967) was an Austrian-German biochemist who was awarded the Nobel Prize in Chemistry in 1938 "for his work on carotenoids and vitamins".

Kuhn was born in Vienna, Austria, where he attended grammar school and high school. His interest in chemistry surfaced early; however he had many interests and decided late to study chemistry. Between 1910 and 1918 he was a schoolmate of Wolfgang Pauli, who was awarded the Nobel Prize in Physics for 1945. Beginning in 1918, Kuhn attended lectures at the University of Vienna in chemistry. He finished his chemistry studies at University of Munich and received his doctoral degree in 1922 with Richard Willstätter for a scientific work on enzymes.

After graduating, Kuhn continued his scientific career, first in Munich, then at the ETH Zurich and from 1929 onwards at the University of Heidelberg, where he was head of the chemistry department beginning in 1937. In 1928 he married Daisy Hartmann and the couple subsequently had two sons and four daughters. 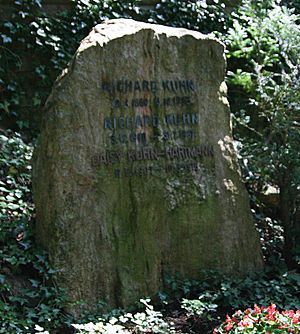 Kuhn's areas of study included: investigations of theoretical problems of organic chemistry (stereochemistry of aliphatic and aromatic compounds; syntheses of polyenes and cumulenes; constitution and colour; the acidity of hydrocarbons), as well as extensive fields in biochemistry (carotenoids; flavins; vitamins and enzymes). Specifically, he carried out important work on vitamin B2 and the antidermatitis vitamin B6.

He was subsequently awarded the Nobel Prize in Chemistry in 1938 for his "work on carotenoids and vitamins," but rejected the prize as Hitler had forbidden German citizens to accept it. In a hand-written letter, he even described the awarding of the prize to a German as an invitation to violate a decree of the Führer. He received the award after World War II. Kuhn is also credited with the discovery of the deadly nerve agent Soman in 1944.

Kuhn was editor of Justus Liebigs Annalen der Chemie from 1948.

Kuhn collaborated with high-ranking Nazi officials and denounced three of his Jewish co-workers in 1936.

In 2005, the Society of German Chemists (Gesellschaft Deutscher Chemiker, GDCh) declared their intention to no longer award the Richard Kuhn Medal: “The board of the GDCh intends to discontinue awarding the Medal named after the organic chemist, Nobel Prize laureate of the year 1938 and President of the GDCh in 1964–65, Richard Kuhn. The board thereby draws the consequences out of research on Richard Kuhn’s behaviour during National Socialism. Even though the question of whether Kuhn was a convinced National Socialist or just a career-oriented camp follower is not fully answered, he undisputably supported the Nazi-regime in administrative and organizational ways, especially by his scientific work. Despite his scientific achievements, Kuhn is not suitable to serve as a role model, and eponym for an important award, mainly due to his unreflected research on poison gas, but also due to his conduct towards Jewish colleagues” (Nachrichten aus der Chemie 54, May 2006, p. 514).

All content from Kiddle encyclopedia articles (including the article images and facts) can be freely used under Attribution-ShareAlike license, unless stated otherwise. Cite this article:
Richard Kuhn Facts for Kids. Kiddle Encyclopedia.