Robert Eugene Bush was an American military during World War II. He was serving as a hospital corpsman for the United States Navy. Het was honored with a Medal of Honor for his brave actions during the Battle of Okinawa. 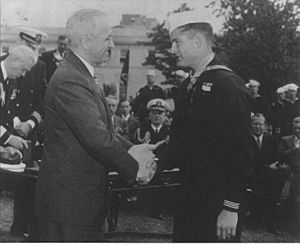 President Truman handing over the Medal of Honor to Robert E. Bush

During the invasion of Okinawa he got wounded on May 2, 1945, during an attack on a rifle company that he was on patrol.

At 18 years of age he was awarded for his braveness by President Truman in a White House with the Medal of Honor.

After the war, he returned to finish high school. Then he went on with a study in business administration at the University of Washington.

After he finished study, he founded the Bayview Lumber Company at South Bend, Washington in 1951 and Bayview Redi-Mix at Elma, Washington.

Tom Brokaw, a television personality and journalist, wrote a chapter about Bush in his World War II book The Greatest Generation (1998).

Robert and Wanda Bush were the parents of three sons and a daughter. He died from cancer on November 8, 2005, in Olympia, Washington when he was 79 years old.

All content from Kiddle encyclopedia articles (including the article images and facts) can be freely used under Attribution-ShareAlike license, unless stated otherwise. Cite this article:
Robert Eugene Bush Facts for Kids. Kiddle Encyclopedia.