Lieutenant General Robert Lee Bullard (January 5, 1861 – September 11, 1947) was a senior officer of the United States Army. He was involved in conflicts in the American Western Frontier, the Philippines, and World War I, where he commanded the 1st Infantry Division (nicknamed "The Big Red One") during the Battle of Cantigny while serving on the Western Front. He later was an administrator in Cuba.

A native of Alabama, Bullard attended the Agricultural and Mechanical College of Alabama, now Auburn University, and the United States Military Academy, graduated in 1885, and was appointed first lieutenant in 1892. He served in various capacities in the Spanish–American War, and in the Philippines from 1902 to 1904. He was made lieutenant colonel in 1906. In 1907, he was special investigator for the U.S. provisional government in Cuba, and the following year was superintendent of public instruction there. In 1911, he was promoted to colonel.

After the American entry in World War I, Bullard was quickly promoted to brigadier general (June 1917) and major general N.A. (August 1917). He commanded the 1st Infantry Division ("Big Red One") from December 1917 to July 1918.

During World War I, he led men in the Battle of Cantigny (1918) and captured the village of Cantigny. It had been held by the German Eighteenth Army. It was the site of a German advance observation point and strongly fortified. This was the first sustained American offensive of the war. It was considered a success in that it expanded the American front by about a mile. General John J. Pershing said of the attack:

The enemy reaction against our troops at Cantigny was extremely violent, and apparently he was determined at all costs to counteract the most excellent effect the American success had produced. For three days his guns of all calibers were concentrated on our new position and counter-attack succeeded counter-attack. The desperate efforts of the Germans gave the fighting at Cantigny a seeming tactical importance entirely out of proportion to the numbers involved."

Bullard was fluent in French and often served in joint U.S.–French operations.

General Pershing created the Second U.S. Army in October 1918 and appointed Bullard as its first commander with the rank of lieutenant general. At the same time he turned over command of First United States Army to Lieutenant General Hunter Liggett. Pershing retained his position as commander of the American Expeditionary Force (AEF) with authority over both of the armies.

Bullard's military actions have also been subject to criticism. In the Battle of Montfaucon, Bullard reportedly refused orders to turn the flank of the German troops with his 4th division as he did not want to help Major General George H. Cameron get credit for taking the German fortress at Montfaucon. Due to his alleged disobedience or deliberate misinterpretation of orders, Cameron's 79th division had no support to their right and suffered unnecessarily severe casualties as they performed a frontal attack on the fortress. Additionally, Bullard continued to conduct offensive operations, with full knowledge that the Armistice was due to take effect in a few hours, was criticized by Alden Brooks in his post-war account of the war, As I Saw It (1930). 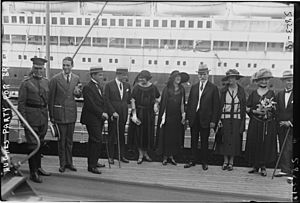 The Second Army was deactivated in April 1919 and Bullard reverted to his permanent rank of major general in June 1920. He was assigned to corps command in the much smaller post war U.S. Army. He retired from active duty in 1925 to concentrate on writing. He served as last president of the National Security League from 1925 until he disbanded it in 1947.

He was author of the following books:

All content from Kiddle encyclopedia articles (including the article images and facts) can be freely used under Attribution-ShareAlike license, unless stated otherwise. Cite this article:
Robert Lee Bullard Facts for Kids. Kiddle Encyclopedia.