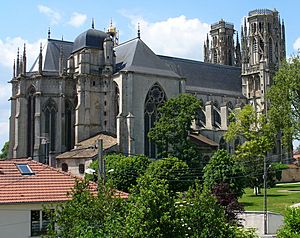 Toul has a cathedral

Toul is a city in the Northeastern part of France. There are about 17,000 people living there. Toul is a fortified town, with a long history. The people who started building the city were the Romans. It was the capital of the Leuci tribe. When the Carolingian Empire was split by the Treaty of Meerssen, in 870, Toul was given to East Francia. In the early 1800s, the importance of the city diminished, and Nancy took its place.

All content from Kiddle encyclopedia articles (including the article images and facts) can be freely used under Attribution-ShareAlike license, unless stated otherwise. Cite this article:
Toul Facts for Kids. Kiddle Encyclopedia.