Rocky Mount is a town in and the county seat of Franklin County, Virginia, United States. The town is part of the Roanoke Metropolitan Statistical Area, and had a population of 4,799 as of the 2010 census. It is located in the Roanoke Region of Virginia. 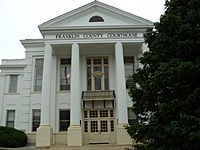 The first English colonists arrived here in 1760, and they named Rocky Mount for a steep cliff near the town. The area originally consisted of two adjacent villages, Rocky Mount and Mount Pleasant. The first court was held at Rocky Mount in 1786 following the Revolutionary War. The first courthouse, made of logs, was replaced in 1831. By 1836 the town consisted of 30 homes and several businesses.

During the Civil War, numerous planter families from the Tidewater region sought refuge in Rocky Mount, and many brought substantial numbers of slaves with them. Among these were the immediate past governor, Henry A. Wise, who settled his family here before he served in the military. The Confederate General Jubal Anderson Early, born on a farm nearby, practiced law in Rocky Mount before and after the war.

In 1873, Rocky Mount absorbed the smaller village of Mount Pleasant, creating the present boundaries of the town, and it was incorporated that year. The present Franklin County courthouse was constructed in 1909 at Rocky Mount.

The climate in this area is characterized by hot, humid summers and generally mild to cool winters. According to the Köppen Climate Classification system, Rocky Mount has a humid subtropical climate, abbreviated "Cfa" on climate maps. 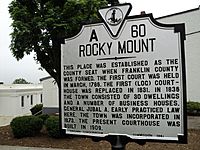 All content from Kiddle encyclopedia articles (including the article images and facts) can be freely used under Attribution-ShareAlike license, unless stated otherwise. Cite this article:
Rocky Mount, Virginia Facts for Kids. Kiddle Encyclopedia.