There is no lineal connection to the Rocky Mountain Rangers of the North West Rebellion of 1885.

Lineage of the Rocky Mountain Rangers:

The camp flag of The Rocky Mountain Rangers.

The 172nd Battalion (Rocky Mountain Rangers), CEF was authorized on 15 July 1916 and embarked for Great Britain on 25 October 1916. There, its personnel were absorbed by the 24th Reserve Battalion, CEF on 1 January 1917 to provide reinforcements for the Canadian Corps in the field. The battalion disbanded on 17 July 1917.

The regiment subsequently mobilized the 1st Battalion, The Rocky Mountain Rangers, CASF for active service on 1 January 1941. It served in Canada in a home defence role as part of the 18th Infantry Brigade, 6th Canadian Division and took part in the expedition to Kiska, Alaska as part of the 13th Canadian Infantry Brigade Group, serving there from 16 August 1943 to 12 January 1944. It embarked for Great Britain on 25 May 1944. It was redesignated as the 1st Canadian Infantry Training Battalion, Type A (Rocky Mountain Rangers), CASF on 1 November 1944. Following VE-Day it was redesignated as the No. 9 Canadian Repatriation Depot, Type "T"' on 5 July 1945. The overseas battalion disbanded on 28 January 1946.

On July 1, 1898, five independent rifle companies were formed in the interior of British Columbia at Kamloops, Nelson, Kaslo, Rossland, and Revelstoke. These units were named by their location (Kamloops Rifle Company etc.) The independent companies were renamed the Rocky Mountain Rangers in 1900 but remained independent companies. No regimental headquarters was established at this time. The same year saw nineteen men from the unit depart to fight in the Second Boer War.

On April 1, 1908, an additional company was formed in Nelson, this unit with the three southern companies were amalgamated to form the 102nd Regiment with headquarters in Nelson. An independent company was formed in Armstrong. The Rocky Mountain Rangers were reduced to two companies in Kamloops and Revelstoke. In 1909 these two remaining companies were amalgamated with the others to form the 102nd Regiment Rocky Mountain Rangers. In 1912 a reorganization of the regiment saw the companies in Rossland, Nelson, Kaslo and Revelstoke disbanded, the headquarters relocated to Kamloops and the Armstrong company amalgamated. Later that year, the Revelstoke company was reinstated and more companies added at Kelowna, Salmon Arm, Vernon and Penticton.

With the advent of the First World War, the 102nd Regiment Rocky Mountain Rangers was placed on active service for local protection duties. In 1916 the unit raised the 172nd Battalion Canadian Expeditionary Force for overseas deployment. On arrival overseas the battalion was dispersed to augment other Canadian infantry units. Although the men did not fight as Rocky Mountain Rangers, the regiment was awarded battle honours by virtue of their contribution in the battles of Arras, 1917, Hill 70, Ypres 1917, Amiens, Hindenburg Line and Valenciennes. Princess Patricia of Connaught presented a set of unofficial colours to the 172nd battalion in 1916. The Battle Honours were emblazoned on the colours after the war.

The 102nd Regiment continued to serve in a reserve capacity for much of the war. One of its tasking was to staff internment camps at Revelstoke, Mara Lake and Vernon. The 102nd also provided substantial numbers to the 54th (Kootenay) Battalion of the CEF. In 1917 the 172nd Battalion was reduced to nil and disbanded to be perpetuated by The Rocky Mountain Rangers. In 1920 the regiment renamed The Rocky Mountain Rangers and reorganized to four companies. The unit organization remained basically the same until the start of the Second World War.

In August 1939 the regiment was called out for local defence duties, to guard vulnerable points along the CPR/CNR railways. This task was taken over by the Royal Canadian Mounted Police by early 1940 as the regiment was down to almost nil strength due to reinforcement drafts to other active units.

In June 1940 the regiment, redesignated The Rocky Mountain Rangers CASF, was ordered to mobilize to full wartime strength. The active service 1st Battalion was employed on west-coast defence duties in various communities in the Vancouver area, Prince Rupert and on Vancouver Island. During one notable deployment, the battalion marched from Kamloops to Vancouver as a training exercise under simulated war conditions. The 500 km march took 14 days with temperatures reaching 40 degrees Celsius. This march was re-enacted by the unit's serving members in 1998.

The situation developing in the Pacific presented a real and immediate threat to the Pacific coast and the BC interior. To meet this threat the reserve unit, now re-designated the 2nd Battalion, was assigned to the 39 (Reserve) Brigade Group and tasked to provide protection of vulnerable industrial points along the CPR railroad lines in the interior and to recruit and train as part of a brigade group in defence of the west coast. With its headquarters remaining in Kamloops, the battalion was spread along the main and southern CPR rail lines from Ashcroft in the west to Fernie in the east.

In 1943 the 1st Battalion, then part of the 13th Infantry Brigade, sailed from Vancouver Island to the American base on the island of Adak in the Aleutian Island chain where the battalion underwent specialized training for the assault on the Japanese-occupied island of Kiska. The Rocky Mountain Rangers formed the core of the 16th Canadian Combat Team for the assault on Kiska. The force sailed from Adak on 13 August for a scheduled assault on Kiska two days later. As it was, the Japanese had abandoned the island several days before under the cover of fog and darkness, leaving a cannon which was later brought back to Vernon Military Camp. The Rangers remained on the island until the middle of January 1944, unfortunately losing an officer and several men to booby traps and friendly fire. This operation is commemorated every year with the unit's Christmas dinner being designated as Kiska dinner. Later that year the 1st Battalion sailed to Europe as part of the 13th Infantry Brigade. Upon arrival in England the Rangers were welcomed and hosted by the British infantry regiment The Green Howards (Alexandra, Princess of Wales Own Yorkshire Regiment), the beginning of a close relationship which continues today. The two regiments were officially designated allied regiments in 1948. As in the First World War the 1st Battalion was broken up to augment other under strength Canadian units. Once again over 5000 Rocky Mountain Rangers fought overseas with other Canadian units.

The original Regimental Colour presented to the regiment by Princess Patricia in 1916, though never consecrated, now hang in St Paul's Cathedral in Kamloops. In 1983 Prince Philip, Duke of Edinburgh, presented the first official consecrated colours to the regiment in a ceremony at Kamloops. A replacement Regimental Colours was presented in 1998 following the official reversion to green facings used by the rifle regiments in place of the blue facing used by line infantry regiments.

In 2008 the unit saw the deployment of 12 of its soldiers to Afghanistan, and has since deployed troops in further support of the Canadian effort in Afghanistan. 2008 also marked the unit's 100th anniversary, making it one of the first reserve units in British Columbia to do so. In addition to Afghanistan related deployments, Rocky Mountain Rangers also provided support to the 2010 Winter Olympics.

In February 2011, 39 Canadian Brigade Group announced that the Rocky Mountain Rangers would be standing up a detachment of company strength in the community of Prince George, forty years after the unit there had been reduced to nil strength. The Rocky Mountain Rangers continue successful recruiting efforts in the community, having reached platoon size, "B" Company is approaching company size. 2016 saw an average of 60 soldiers parading out of Prince George, up from the expected 30 or so in 2013. 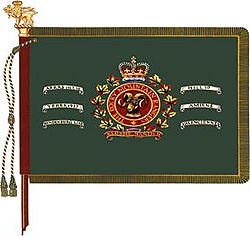 The regimental colour of The Rocky Mountain Rangers.

In the list below, battle honours in capitals were awarded for participation in large operations and campaigns, while those in lowercase indicate honours granted for more specific battles. Those battle honours followed by a "+" are emblazoned on the regimental colour.

There are several Royal Canadian Army Cadets corps spread across British Columbia that are or have been affiliated to the Rocky Mountain Rangers.

The museum collects and preserves artifacts, documents, records and material relating to the history of The Rocky Mountain Rangers in peace and war, and its history within the context of the military history of Canada, both for Regimental personnel and the general public.

All content from Kiddle encyclopedia articles (including the article images and facts) can be freely used under Attribution-ShareAlike license, unless stated otherwise. Cite this article:
Rocky Mountain Rangers Facts for Kids. Kiddle Encyclopedia.