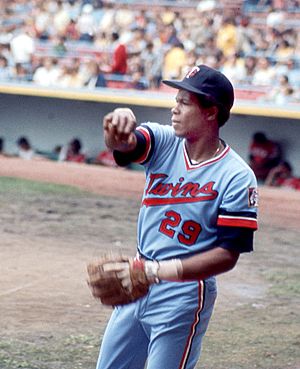 Rod Carew with the Twins

Rodney Cline "Rod" Carew (born October 1, 1945) played Major League Baseball for the Minnesota Twins and California Angels. He is a member of the Baseball Hall of Fame. Carew made the All-Star Game eighteen years in a row, from his rookie season of 1967 to 1984. He retired after the 1985 season.

All content from Kiddle encyclopedia articles (including the article images and facts) can be freely used under Attribution-ShareAlike license, unless stated otherwise. Cite this article:
Rod Carew Facts for Kids. Kiddle Encyclopedia.