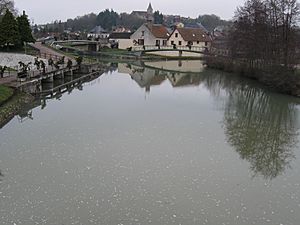 View of Rogny-les-sept-écluses from the canal

Rogny-les-Sept-Écluses is a commune in the Yonne department in Bourgogne-Franche-Comté in north-central France. The name of the commune comes from its impressive seven locks on Briare Canal.

The commune is located some 50 km (31 mi) west of Auxerre and is crossed by the Loing and the Briare Canal. It is situated at 20 km north of Gien and 140 km south of Paris. The commune is in the natural area of Puisaye,

Rogny-les-sept-écluses was simply known as Rogny before 1978, when the name was changed to mirror its famous monument.

Human settlement in the area dates back to Roman times. Medals and coins bearing the image of the Emperor Constantine (306-337) and the Gaulish tyran Tetricus (268) were found along an ancient Roman road. 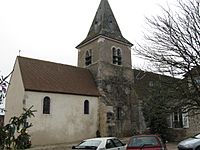 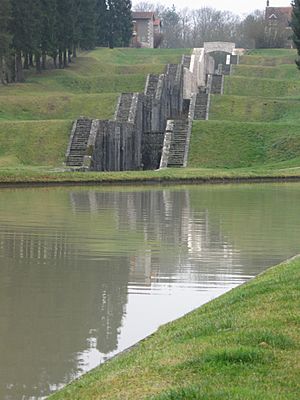 The old staircase of seven locks of the Briare Canal

The church is still on the hill where the historical commune stood and now dominate the village. It was dated 12th century, but the structure was modified many times. The church has kept his Romanesque porch. The most remarkable possession of the church is a painting called Les Pèlerins d’Emmaüs from 1757 and designated as historical monument in 1908. The painting was credited to Adrien Lebeau. The bell has a diameter of 1.20 m and is from 1659 It has been dubbed Isabelle.

The seven locks and Briare Canal

The Briare Canal and its main work, the seven locks (or sept écluses in French), were part of the enormous work of Henry IV and Sully to join the Mediterranean Sea to the English Channel by a network of canals and rivers. The locks were built to join the Loire to the Seine water system.

It was Hugues Cosnier's idea to built six locks (a seventh one was built later) to cross the Vallée du Loing (côte Rogny, hence the name Rogny-les-sept-écluses).

Cosny had chosen Rogny for its work because of the presence of many ponds, and the water was to be used to operate the locks. 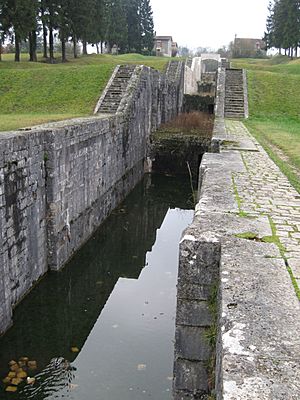 View of the locks, now out of use

Construction for both the locks and the Briare Canal started in 1604, and required next to 12,000 workers, that needed to be house in the town. To these workers, some 6000 soldiers came to monitor the construction site when the construction was halted during the Thirty Years War. Material thef was a real problem at the time.

The locks and the canal adjacent were finally open for navigation in 1642, under the name "Canal de Loyre en Seyne", before taking the name Briare Canal in 1666. The lock were the first of their kind to be built in France. The life of the villagers was thus linked to navigation in the area, and they were proud to lead the boats on the towpath.

Every year since 1967 at the end of July, the commune has held a pyrotechnics show next to the locks. This is also the occasion for musical and comedy performances, before the main event of the fireworks.

All content from Kiddle encyclopedia articles (including the article images and facts) can be freely used under Attribution-ShareAlike license, unless stated otherwise. Cite this article:
Rogny-les-Sept-Écluses Facts for Kids. Kiddle Encyclopedia.