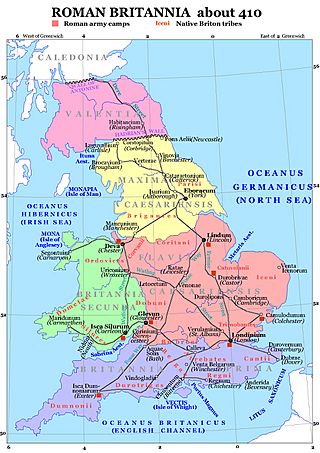 Roman Wales in 410 AD, when was called "Britannia secunda" (in green color) by the Romans

Roman Wales is the area of modern Wales that was under Roman Empire control.

Up to and during the Roman occupation of Britain, the native inhabitants of Iron Age Britain spoke "Brythonic" languages (a sub-family of the Celtic languages) and were regarded as Britons (or Brythons). The area of modern Wales was divided among a number of tribes, of which the Silures in modern south-east Wales and the Ordovices in central and northwest Wales were the largest and most powerful. These two tribes were the ones who put up the strongest force to the Roman invasion: Mona (the island of Anglesey) was only conquered by Gnaeus Julius Agricola in 78 AD.

The first attack on the Celtic tribes of what is now Wales was made under the legatus Publius Ostorius Scapula about 48 AD. Ostorius first attacked the Deceangli in the north-east, who appear to have surrendered with little resistance. He then spent several years campaigning against the Silures and the Ordovices. Their resistance was led by Caratacus, who had fled what is now southeast England when it was conquered by the Romans. He first led the Silures, then moved to the territory of the Ordovices, where he was defeated by Ostorius in 51 AD. Caratacus fled to the Brigantes, whose queen handed him over to the Romans.

The Romans divided their new province Britannia into a civilian lowland zone and a highland military zone. Fortresses, each capable of housing a legion of 5,600 men, were established at York, Chester and Caerleon. In Wales, part of the military zone, there were at least 30 auxiliary forts linked by straight roads and situated a day's march from each other.The forts were not all fully manned for long, as most of the inhabitants of Wales came to accept Roman rule.

The Silures waged effective warfare against the Roman forces. Ostorius died with this tribe still unconquered; after his death they won a victory over the Roman Second Augusta Legion, Legio II Augusta. There were no more attempts to extend Roman control in Wales until the governorship of Caius Suetonius Paulinus, who attacked further north and captured the island of Anglesey in 60 or 61 AD. However he was forced to stop the offensive to meet the threat from the rebellion of Boudica.

The Silures eventually came under Roman rule by Sextus Julius Frontinus in a series of campaigns ending about 78 AD. His successor Gnaeus Julius Agricola subdued the Ordovices and recaptured Anglesey by the beginning of 78 AD. 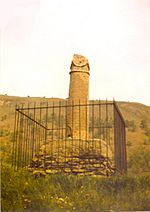 Remains of the Pillar of Eliseg near the town of Llangollen, Wales, erected c. 855. It lists Magnus Maximus as an ancestor of a medieval Welsh king.

Wales was part of the Roman Empire for over 300 years. During that era Roman habits and culture won widespread acceptance in much of the country. Yet, unlike in most of Western Europe, the Latin of the Romans did not replace the native language of the people. It did, however, have an impact upon it, for Brythonic absorbed Latin words for things like forts, windows, rooms and books, words which were passed on to Welsh.Roman art had an impact too, for it replaced the Celtic art of the Britons. Among members of the upper classes at least, there was a readiness to accept that they themselves were Roman, especially after AD 214 when the emperor, Caracalla, granted Roman citizenship to all free men throughout the Empire.

The Romans occupied the whole of the area now known as Wales, where they built Roman roads and Roman forts, mined gold at Luentinum and conducted commerce, but their interest in the area was limited because of the difficult geography and shortage of flat agricultural land. Most of the Roman remains in Wales are military in nature.

The area was controlled by Roman legionary bases at Deva Victrix (modern Chester) and Isca Augusta (Caerleon), two of the three such bases in Roman Britain, with roads linking these bases to Roman auxiliary forts such as Segontium (actual Caernarfon) and Moridunum (actual Carmarthen).

Romans are only known to have founded one town in Wales, Venta Silurum (Caerwent) in Monmouthshire, although the fort at Moridunum (Carmarthen) was later superseded by a civilian settlement. The modern-day Wales is thought to have been part of the Roman province of "Britannia Superior", and later of the province of "Britannia Secunda", which also included part of what is now the West Country of England.

The later part of the third century witnessed a new concern: defending the coast from seaborne marauders from Hibernia (actual Ireland). The response was a Saxon Shore-style fort at Cardiff and refurbishment elsewhere.

It is not clear when the legionary garrison at Caerleon was finally withdrawn, possibly by the end of the third century, although it may have left a skeleton force there as late as the mid-fourth century.

The military dispositions in late fourth-century Wales at Cardiff, Caernarfon, Holyhead and Caerhun seem to have been concerned with continuing incursions by Irish bands.

The remaining recognisably military posts seem to have been abandoned c.AD 393 when soldiers were needed to counteract a rebellion in Gaul. There is some evidence that troops may have been left to guard the towns of Carmarthen and Caerwent into the fifth century.

Wales was occupied by the Romans from the first century AD to the Roman withdrawal from Britain nearly four centuries later, leaving their province to develop into Sub-Roman Britain and the emergence of Wales in the Early Middle Ages.

South-east Wales was the most Romanised part of the country. It is possible that Roman estates in the area survived as recognisable units into the eighth century. The kingdom of Gwent is likely to have been founded by direct descendants of the (romanised) Silurian ruling class.

The only city founded by the Romans in Wales is Caerwent, called Venta Silurum in 75 AD when was created, and the last place to be left by the Romans. 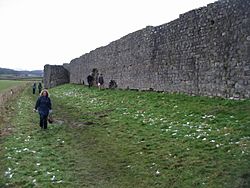 The town lacked substantial defences until the mid 4th century, when stone town walls were built. A small garrison may have been based in the town during that period. Large sections of the defensive walls are still in place, rising up to 5 metres (17 feet) in height in places.

The walls have been described as "easily the most impressive town defence to survive from Roman Britain, and in its freedom from later rebuilding one of the most perfectly preserved in Northern Europe."

Indeed, the Roman town remained occupied after the Roman troops left, until at least the end of the fifth century. Caerwent has been even called the possible Camelot of King Arthur, because it is located only ten miles from the Roman fort Isca Silurum (actually Caerleon), that Geoffrey of Monmouth wrote was the place of the Round Table.

Furthermore, it appears that Christian worship was already established in the town in the fifth century, and it may have had a bishop. A monastery was founded by Saint Tatheus in the 6th century, and a Christian cemetery was also established around the site of the present church.

The name Venta gave its name to the emerging Kingdom of Gwent, and the town itself became known as Caer-went or "Castra/Fort of Venta/Gwent". Tradition holds that Caradog Freichfras of Gwent moved his court from Caerwent to Portskewett during the second half of the 6th century, finishing in this way the last romanised presence in Wales.

Finally, Gwyn A. Williams argues that even at the time of the erection of Offa's Dyke (that divided Wales from medieval England) the people to its west saw themselves as "Roman", citing the number of Latin inscriptions still being made into the 8th century.

All content from Kiddle encyclopedia articles (including the article images and facts) can be freely used under Attribution-ShareAlike license, unless stated otherwise. Cite this article:
Roman Wales Facts for Kids. Kiddle Encyclopedia.