Kids Encyclopedia Facts
Not to be confused with El Rosarito.

Its beaches and dance clubs are a popular destination for young people from the United States during the Memorial Day and Labor Day weekends. Rosarito Beach is the seat of the municipality of Rosarito Beach. The city is the second largest in the Tijuana metropolitan area and southern beach city of the San Diego–Tijuana international metropolitan region.

Additionally, it is the westernmost municipal seat in Mexico, slightly farther west than neighboring Tijuana, which lies inland to its north-northeast. As of 2010, the city had a population of 65,278.

Evidence of the presence of Paleo-Indians in the region has been dated as early as 2,000 BCE By 1,000 BCE, a group emerged that is recognizable as the Yuman ancestors of the Kumeyaay, who continued to inhabit the northern portion of the Baja California Peninsula at the time of European contact. The Kumeyaay referred to the area now known as Rosarito Beach as Wa-cuatay, which translates to "big houses" in the Kumeyaay language.

After conquering the Aztec Empire, Hernán Cortés sent expeditions to explore what he believed to be the Island of California. In 1533, mutineer Fortún Ximénez was the first European to land in Baja California, at La Paz, Baja California Sur. In September 1542, Juan Rodríguez Cabrillo passed through the Rosarito Beach area on his way from Ensenada to San Diego Bay. 1697 saw the establishment of the first permanent European settlement in Baja California in a Jesuit mission at Loreto. Rosarito would soon be caught in a power struggle between Jesuits, Dominicans, and Franciscan monks for decades.

In 1773, a frontier was defined separating Nueva ("new") or Alta ("upper") California, under the jurisdiction of the Franciscans, from Antigua ("old") or Baja ("lower") California, which was entrusted to the Dominicans. In 1788, Luis de Sales, a Dominican priest, redrew the boundary, extending Baja California to the Rosarito Arroyo, known at the time as the Barrabas Arroyo.

Because Mission San Miguel, 13 kilometers to the south, was frequently flooded by the Río Guadalupe, Dominican missionary Tomás de Ahumada sought another site on higher ground for at El Descanso. Additional advantages of the northerly location were good grazing and plentiful arable land. In 1817, Ahumada founded the Misión El Descanso or Misión San Miguel la Nueva among the Kumeyaay people 22 kilometers to the south of the present-day Rosarito Beach.

In 1830, Father Félix Caballero constructed an adobe church here and managed both missions from El Descanso, but in 1834, it ceased to function as a mission. At the time it had a population of just 254, including those from Mission San Miguel. By 1853 the mission was deserted. Ruins of Misión El Descanso remain within the community of El Descanso.

The property of Rancho El Rosario, granted by José María de Echeandía in 1827 to Don José Manuel Machado, one of the first soldiers stationed at the Presidio of San Diego, was the first ranch in the modern-day Rosarito region. The 11 league rancho was bounded on the north by Rancho Tía Juana, on the west by the Pacific Ocean and on the south by public lands. Subsequently, his son, Don Joaquín Machado, applied for title to the land as Rancho Rosarito to President Porfirio Díaz. On May 14, 1885, Machado received his title and registered it in Ensenada, then the capital city of the Northern District of Baja California Territory. May 14 is now recognized and celebrated as Rosarito's Foundation Day by the Historical Society of Rosarito. Rosarito´s College Center It is a branch of the Autonoums University of Baja California. It is located in the city of Rosarito in Baja California. In this College Center the Bachelor´s degrees offered are: Administration and Public Accounting, Social Sciences and Humanities, Commerce and International Relations, Communication, Journalism, Education and Pedagogy, Engineering and Technology, Psychology, Social Sciences of Behavior.

On December 1, 1995, Rosarito was converted from a suburb of Tijuana, to an independent city. Hugo Torres Chabert, current owner of the Rosarito Beach Hotel led the incorporation drive and was subsequently appointed to a three-year term as Mayor. The territory surrounding the city became the fifth municipality of the State of Baja California.

The geographic city limits of Rosarito Beach Municipality are quite large, abutting the Tijuana city limits to the north, and Ensenada to the south along the coast and inland, however, the core settlement is compact.

Rosarito's evolution was marked with further construction and the development of shopping centers and more restaurants and shops were established along the main street. This street has been renovated and enlarge to encompass four lanes and a lighted meridian strip and was officially designated Boulevard Benito Juárez in the year 1989.

During the 1970s and early 1980s, Rosarito's growth was moderate but constant. The mid-1980s, however, was marked with the strong development of tourist-related businesses of obviously considerable investment.

Rosarito Beach was the source of rocks for the Pet Rock collectible of the 1970s.

In the early 1990s appreciable economic growth was achieved by the construction and competition of numerous hotels (such as Las Rocas) in 1989, condominiums and shopping centers.

The impact of cityhood on modern Rosarito Beach cannot be understated. Prior to incorporation, all tax revenue was filtered through the coffers of Tijuana. Post incorporation has marked major improvements in infrastructure. Due to rapid growth, some streets are indeed still unpaved, however the vast majority of streets have been improved with pavement, curbs and street lights. The city announced in late 2008 that the Baja water and sewer utility was expediting completion of major projects and paving would soon be complete. The major downtown corridor, Boulevard Benito Juárez, is on a steady rejuvenation plan, where all-new period street lights, wide sidewalks, curbs and gutters are being constructed.

South of the commercial center along Boulevard Benito Juárez, a new, widened four lane Boulevard Popotla is rapidly developing a reputation as a target area for hand-crafted "rustico" furniture, metal sculpture, and boutique art studios and galleries. Fox Studios, where scenes from the movie Titanic were filmed, is located here.

Rosarito Beach lies on the coast of the Pacific Ocean on the Baja California Peninsula. The city is positioned between the foothills of the Peninsular Ranges and the ocean. It maintains a relatively uniform topography and displays few variances in terrain. 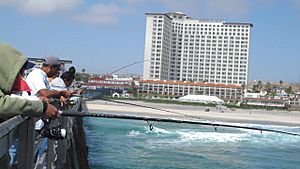 Rosarito Beach Hotel - one of the many highrises on the beach

Urbanization in 1950 marked the beginning of Rosarito's contemporary-era development as planning and construction of streets and city blocks took place. As land sales soared, coupled with the construction of small restaurants, some shops and two hotels, the city began to take shape its present-day appearance. In the 1960s, Rosarito entered the commercial and industrial era with the constructions of a large thermoelectric power plant and the later installations of Pemex, the state-owned petroleum company.

The city maintains luxury resorts that take the form of skyscrapers on its coast. The majority of these buildings are located on Boulevard Benito Juárez, also the city's main Boulevard. Residential and commercial highrises continue to go up along the coast, towards both Tijuana and Ensenada.

Rosarito Beach has a semi-arid climate with Mediterranean-like precipitation patterns (Köppen climate classification BSh/BSk). The climate is strongly influenced by the cold California Current and as a result, temperatures are mild throughout the year with average temperatures ranging between 14.3 °C (57.7 °F) and 20.9 °C (69.6 °F).

On December 16 of 2008 the city center was flooded by heavy rains.

Rosarito has historically been centered on tourism. It began with the Ortiz family's establishment of Rene's (Bar, Restaurant, Trailer Park and Motel) in 1925. Rene served his town holding the position Delegado (Mayor) more than any other politician in Rosarito. Rene, a prominent businessman, helped create Rosarito from a ranch to a town which later became a city. When Rene was not able to serve his people any longer he chose as his successor Hugo Torres Chabert, a friend and owner of Hotel Rosarito.

While Prohibition was the law of the land, many U.S. residents began to cross the border into Mexico, where drinking was still legal. Tijuana seemed to attract a more speakeasy-oriented clientele, and Rosarito became a haven for the more well-heeled and Hollywood set. Rosarito was visited by Hollywood film stars such as Orson Welles and Dolores del Río who were attracted by hunting (deer, quail and rabbit) and fishing (lobster, abalone). While Rita Hayworth was married to Prince Aly Khan, son of Aga Khan III, the two would visit the Rosarito Beach Hotel, take over an entire floor, and bring their own staff, including a personal chef. Other Hollywood visitors included Mickey Rooney, Ava Gardner, Spencer Tracy and Katharine Hepburn. In early 2008, Britney Spears made a one-day trip to Rosarito in an attempt to avoid the paparazzi; she failed.

A descendant of Maria Luisa Chabert Uriarte, the young wife of Manuel P. Barbachano the founder of Rosarito Beach Hotel, her nephew Hugo Torres Chabert led the drive to incorporate the city in 1995, and was appointed to a three-year term as Mayor. In 2007, Torres Chabert ran for election and was overwhelmingly elected to a new three-year term. The subject of rising crime rates and police corruption were major issues in the campaign. Torres Chabert, as owner of the Rosarito Beach Hotel, was deeply concerned about the safety of tourists, and pledged strong action to deal with both issues. In early 2008, both federal and state police were ordered into the city (along with neighboring Tijuana) to reinforce the city's efforts.

All content from Kiddle encyclopedia articles (including the article images and facts) can be freely used under Attribution-ShareAlike license, unless stated otherwise. Cite this article:
Rosarito Beach Facts for Kids. Kiddle Encyclopedia.