Rosehill is a suburb of Sutton in south-west London. It lends its name to the Rose Hill roundabout, which connects the A217, A297 and B278. At the 2011 Census the population of the suburb was included in the Sutton North ward of the London Borough of Sutton.

The area surrounding Rosehill is notably green: there are two large green spaces to the southeast and southwest, Rosehill Park East and Rosehill Park West, the latter housing the Sutton Tennis Academy; a park to the west, Thomas Wall Park, named after the local benefactor; and a park to the east opposite St Helier Hospital, called the St. Helier Open Space. It is also residential in character, with two large sets of flats immediately north and south of the roundabout. The northern block of flats is in an Art Deco style, and dates from the 1930s; the southern development was built by Bellway Homes and marketed as luxury apartments circa 2003.

In early Surrey, an enclosure was usually a farm, and Oldfields Farm was located on the southern slope of Rosehill; it was a "south" enclosure because it lay south of the Roman road Stane Street, which is now the modern A24. It was this farm which lends itself to the origin of the name Sutton, originally Sudtone, formed from Old English 'sūth' and 'tūn', meaning "the south enclosure". It appears in a survey of 1496 as "Eldeseldes" and Rose Hill as Fern Hill. Oldfields Farm and another farm to the north, Rosehill Farm (later Rose Hill House), survived until after the First World War when both were demolished to make way for the St. Helier estate.

Rosehill was the site of Sutton's northernmost toll-house and gate on the London to Brighton turnpike road from 1758 until 1882. A milestone dating from 1745 and inscribed "Royal Exchange XI Miles. Whitehall X Miles.", originally built to mark the route from London to Banstead Downs, can be found on the southern slope of Rose Hill on the border with Benhilton. 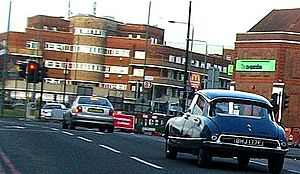 All content from Kiddle encyclopedia articles (including the article images and facts) can be freely used under Attribution-ShareAlike license, unless stated otherwise. Cite this article:
Rosehill, London Facts for Kids. Kiddle Encyclopedia.