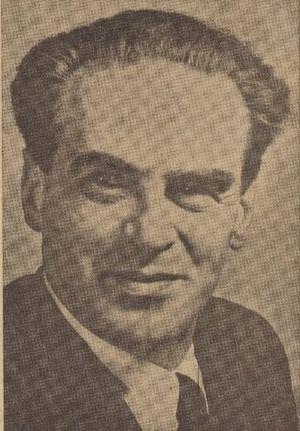 Rudolf Salzmann Slánský (1901–1952) was a Czechoslovak Communist politician. He was a longtime member of the Central Committee of the Communist Party. Later he was the General Secretary of the CPC Central Committee (1945-1951). Slánský was one of the main organizers of the 1948 Czechoslovak coup d'état. During World War II he was a member of Czechoslovak exile resistance in the foreign centre in Moscow. Slánský was executed on December 3, 1952 at Prague’s Pankrac Prison.

Slánský was born on July 31, 1901 in Nezvěstice near Pilsen, Bohemia. His father was a Jewish merchant. He studied at a public academy in Plzeň. Slánský joined the Czechoslovak Communist Party in 1921, three years after it was formed. In 1924 he was the editor of the Communist Party newspaper, Rude Pravo. He rose in the ranks of the Party becoming a member of the Central Committee. He was in hiding from 1929 to 1935 because the Party was illegal in Czechoslovakia at the time. He became a member of the National Assembly and a close associate of Klement Gottwald.

When the Munich Agreement was signed in 1938, Czechoslovakia’s Sudetenland was taken over by Nazi Germany. When the German army marched into the Sudetenland on October 1, 1938, Slánský fled. He went to the Soviet Union and stayed there during most of World War II. He returned to Czechoslovakia in 1944 and took part in the Slovak National Uprising.

Slánský himself had been in charge of purges of several of his associates. When Gottwald thought he might be next, he had Slánský and 13 others arrested. The charges against Slánský included treason, spying and sabotage. Slánský finally confessed after being tortured. Then he had to memorize a speech for the show trial. All of the 14 had confessed. Slánský was one of the 11 who was given a death sentence. On December 3, 1952, he was executed.

After Stalin died in 1953, there were fewer purges. In April 1963, Slánský and his fellow victims were cleared of the charges against them.

All content from Kiddle encyclopedia articles (including the article images and facts) can be freely used under Attribution-ShareAlike license, unless stated otherwise. Cite this article:
Rudolf Slánský Facts for Kids. Kiddle Encyclopedia.