Klement Gottwald (23 November 1896 – 14 March 1953) was a Czechoslovak Communist politician, who was the General Secretary of the Communist Party of Czechoslovakia from 1929 until 1945 and party chairman until his death in 1953.

He was the 14th Prime Minister of Czechoslovakia from July 1946 until June 1948, at which point he became the president of the third republic, four months after the 1948 coup d'état in which his party seized power with the backing of the Soviet Union. 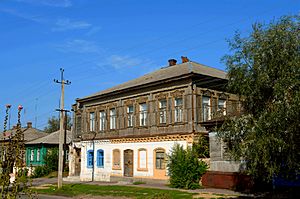 Klement Gottwald was born in Heroltice as the son of a poor peasant. Before the First World War he was trained in Vienna as a carpenter but also actively participated in the activities of the Social Democratic youth movement.

Klement Gottwald was married to Marta Gottwaldová who, like him, came from a poor family. Although his wife stood by him through his endeavours, and was his faithful companion, she never joined the Communist Party. They had one daughter, Marta.

From 1915 to 1918 Gottwald was a soldier in the Austro-Hungarian Army. In the summer of 1918, Gottwald deserted from the army. After the establishment of the first Czechoslovak Republic, he served for two years in the Czechoslovak Army. 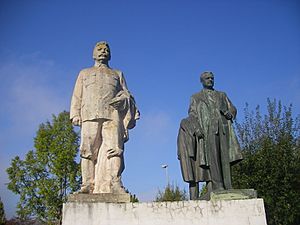 Statues of Stalin and Klement Gottwald

Gottwald had suffered from heart disease for several years. Shortly after attending Stalin's funeral on 9 March 1953, one of his arteries burst. He died five days later on 14 March 1953, aged 56.

Gottwald's body was initially displayed in a mausoleum at the site of the Jan Žižka national monument in the district of Žižkov, Prague. In 1962 the personality cult ended and it was no longer deemed appropriate to show Gottwald's body. His body was cremated, the ashes returned to the Žižka Monument and placed in a sarcophagus.

All content from Kiddle encyclopedia articles (including the article images and facts) can be freely used under Attribution-ShareAlike license, unless stated otherwise. Cite this article:
Klement Gottwald Facts for Kids. Kiddle Encyclopedia.