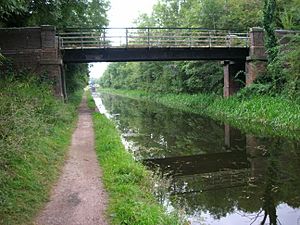 The Rushall Canal is a straight, 2.75-mile (4.43 km), narrow canal suitable for boats which are 7 feet (2.1 m) wide, forming part of the Birmingham Canal Navigations (BCN) on the eastern side of Walsall, West Midlands, England.

The Rushall Canal runs from Rushall Junction (which is within the triangle formed by the flyovers of the junction of the M5 and M6 motorways) on the Tame Valley Canal and climbs due north through nine locks to Longwood Junction at Hay Head, where it joins the 5.25-mile (8.45 km) long Daw End Branch, a meandering, lock-free branch of the Wyrley and Essington Canal (W&E) which joins the main W&E at Catshill Junction near Brownhills. A short, non-navigable, arm at Longwood Junction leads to Hay Head Nature Reserve, which was once an area of limestone mines.

The canal was built in the, then, county of Staffordshire under an Act of Parliament of April 1844 (four years after the merger of the BCN and W&E) to connect the Daw End Branch to The Tame Valley Canal to take coal from Cannock mines to Birmingham and the Black Country. The engineer was James Walker. It was specified to be 36 feet (11 m) wide with towpaths on both sides. The towpaths were to be 9 feet (2.7 m) wide, but only one of them (on the west side) was constructed. It was completed 1847.

All content from Kiddle encyclopedia articles (including the article images and facts) can be freely used under Attribution-ShareAlike license, unless stated otherwise. Cite this article:
Rushall Canal Facts for Kids. Kiddle Encyclopedia.