Ruth is a census-designated place (CDP) in White Pine County, Nevada, United States. Founded in 1903, it had a population of 440 at the 2010 census.

Ruth was built as a company town for the adjacent Robinson Mine, a large open-pit copper mine, which is still in operation as of 2019.

Ruth began as a settlement for workers of the White Pine Copper Company in 1903. It derived its name from the Ruth mining claim which was named for Ruth McDonald, daughter of the original owner of the mining claim.

With the opening Nevada Northern Railway in the year 1906 copper production began to boom.

In 1905, Daniel C. Jackling "evaluated a low-grade copper prospect", which he turned into "an impressive open-pit and satellite cave (the Veteran Mine)." Jackling went on to become president of the Nevada Consolidated Copper Company.

By 1910 the settlement was already established a small distance from the first site. Ruth was a company town for the Nevada Consolidated Copper Company: the houses belonged to the mine and the city and were administered by them.

In 1919 Ruth was the site of a labor dispute when 150 copper miners walked out demanding higher wages. Although some claimed the strike was instigated by the Industrial Workers of the World the leaders were actually from the Western Federation of Miners.

At the beginning of the Great Depression, Ruth had almost 2,300 inhabitants.

Nevada Consolidated Copper Co. was taken over by Kennecott Copper Corporation in 1933.

Ruth ceased being a company town in 1955 when the houses were sold to the John W. Galbreath Company. Occupants were given the opportunity to purchase the homes they had been renting. Around this time the community was moved two miles north to make way for expansion of the Deep Ruth mine.

In 1978 Kennecott closed the mines in Ruth, which went into decline. The elementary school closed in 1986.

Quadra FNX Mining reopened the Robinson Mine in 2004, and it is still in full production as of 2015.

The Nevada Northern Railway Museum maintains some track in the area.

Ruth is the inspiration for the Stephen King novel Desperation.

Ruth experiences a semi-arid climate with hot summers and cold winters, typical of most small towns in the Great Basin. Due to Ruth's substantial elevation and aridity, the Diurnal temperature variation is large. Nights are cool, even in the summer, and frosts can occur any time of the year, although rare in summer months. Daytime highs in the winter tend to be a few degrees above freezing, but nights can be bitterly cold. 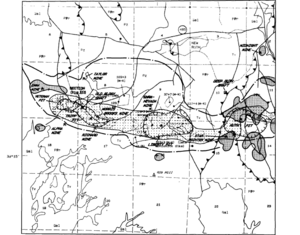 All content from Kiddle encyclopedia articles (including the article images and facts) can be freely used under Attribution-ShareAlike license, unless stated otherwise. Cite this article:
Ruth, Nevada Facts for Kids. Kiddle Encyclopedia.