The San Francisco War Memorial and Performing Arts Center (SFWMPAC) is located in San Francisco, California. It is one of the largest performing arts centers in the United States. It covers 7.5 acres (3 hectares) in the Civic Center Historic District, and totals 7,500 seats among its venues.

Opera, symphony, modern and classical dance, theatre, recitals, plays, lectures, meetings, receptions, special screenings, and gala events all have a place and occur at the Center.

The complex was developed in the 1920s on two blocks on Van Ness Avenue facing San Francisco City Hall from the west. The "War Memorial" name commemorates all the people who served in the First World War, which ended seven years before the project commenced. It was designed by Arthur Brown Jr in 1927-1928, and is one of the last Beaux-Arts style structures erected in the United States. The project resulted in the construction of a matched pair of buildings across a formal courtyard park: the War Memorial Opera House; and the multi-purpose Veterans Building next door. Both were completed and opened in 1932.

The SFWMPAC has historical significance. On June 26, 1945, the United Nations Charter was signed in the Veterans Building's Herbst Theatre by the group of 50 founding nations, following the two-month-long United Nations conference in the Opera House.

In 1951, the Peace Treaty with Japan (commonly called "Treaty of San Francisco"), formally ending World War II hostilities with Japan, was signed in the Opera House. The Center has been host to U.S. presidents and foreign heads of state. In 1990 the Center was chosen to host the first Goldman Environmental Prize ceremony, and this prize is now presented annually at the Center. 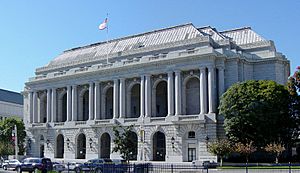 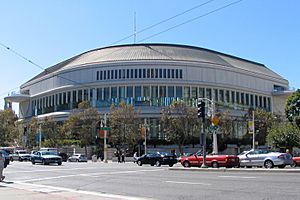 Louise M. Davies Symphony Hall opened in 1980 and, with 2,743 seats, is the major symphony hall of the city. It has been the home of the San Francisco Symphony since its opening.

All content from Kiddle encyclopedia articles (including the article images and facts) can be freely used under Attribution-ShareAlike license, unless stated otherwise. Cite this article:
San Francisco War Memorial and Performing Arts Center Facts for Kids. Kiddle Encyclopedia.