Sand Spring Run is a tributary of White Deer Creek in Union County, Pennsylvania, in the United States. It is approximately 5.7 miles (9.2 km) long and flows through Lewis Township and West Buffalo Township. The watershed of the stream has an area of 4.94 square miles (12.8 km2). The stream is not designated as an impaired waterbody. It is a mountainous freestone stream and is mostly in Bald Eagle State Forest. 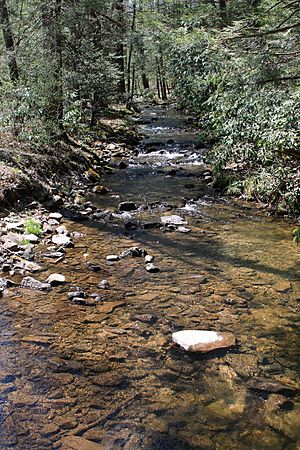 Sand Spring Run begins in a shallow valley on a mountain in Lewis Township. It flows east for several tenths of a mile, passing through two ponds before turning south for several tenths of a mile as its valley deepens. The stream then turns west-southwest for a few tenths of a mile before turning south-southeast. After a few tenths of a mile, it crosses Interstate 80 and turns east-northeast for a few miles, flowing alongside Interstate 80 through a valley. It then receives an unnamed tributary from the left and enters West Buffalo Township. Here, the stream continues flowing east-northeast for a few miles, receiving an unnamed tributary from the right and one from the left. Its valley then broadens and it reaches its confluence with White Deer Creek.

There is a stream gauge on Sand Spring Run near White Deer. 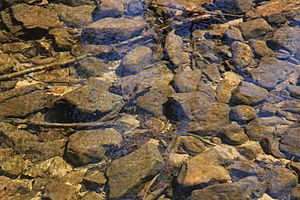 The streambed of Sand Spring Run

Sand Spring Run is in the Ridge and Valley Freestone region. It is a mountainous freestone stream.

The watershed of Sand Spring Run has an area of 4.94 square miles (12.8 km2). The mouth of the stream is in the United States Geological Survey quadrangle of Williamsport SE. However, its source is in the quadrangle of 1186931. The stream's mouth is located near White Deer.

The designated use for Sand Spring Run is aquatic life. A road known as State Route 1010 (White Deer Pike Road/Sugar Valley Narrows Road) flows alongside the stream, as does Interstate 80.

Virtually all of Sand Spring Run is within Bald Eagle State Forest.

All content from Kiddle encyclopedia articles (including the article images and facts) can be freely used under Attribution-ShareAlike license, unless stated otherwise. Cite this article:
Sand Spring Run Facts for Kids. Kiddle Encyclopedia.