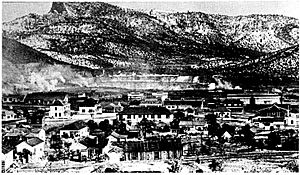 Santa Rita in 1919 with mine in background

Santa Rita is a ghost town in Grant County in the U.S. state of New Mexico. The site of Chino copper mine, Santa Rita was located fifteen miles east of Silver City.

Copper mining in the area began late in the Spanish colonial period, but it was not until 1803 that Franscisco Manuel Elguea, a Chihuahua banker and businessman, founded the town of Santa Rita. He named it Santa Rita del Cobre (Saint Rita of the Copper), after Saint Rita of Cascia and the existing mine. During the early 19th century the mine produced over 6 million pounds of copper annually. The crudely smeltered ore was shipped to Chihuahua for further smelting and then sent to Mexico City on mule back. The area was relatively peaceful, despite an occasional attack from the Warm Springs (Mimbres) band of the Chiricahua Apache, who lived nearby at the headwaters of the Gila and Mimbres rivers. In 1837, however, an American trader named John Johnson lured the Apaches to a gathering and then massacred them to sell their scalps for the bounty offer by the Mexican government. This caused open warfare and almost all of the nearly 500 inhabitants of Santa Rita were killed in an attack on the town; only six managed to reach safety in Chihuahua. The town was abandoned until 1849, when the U.S.Army established a command post on the site, calling it Cantonment Dawson. (See Apache-Mexico Wars)

Martin B. Hayes reopened the mine in 1873 after Cochise signed a treaty of peace; however, the town continued to be subject to Apache attacks from Geronimo, Victorio and other Apache warleaders until 1886, when Geronimo surrendered for the last time. A post office opened in 1881 and the coming of the railroad five years later spurred further development of the mine.

After the Santa Rita mine was converted to an open pit in 1901, the town was forced to move several times as the pit grew. Shortly after the town relocated in 1957, heavy rains washed boulders and mud into the new townsite. The town was abandoned once and for all in 1967, and the school system for the area was discontinued in 1972.

All content from Kiddle encyclopedia articles (including the article images and facts) can be freely used under Attribution-ShareAlike license, unless stated otherwise. Cite this article:
Santa Rita, New Mexico Facts for Kids. Kiddle Encyclopedia.